Pink Lego for girls says Lego. It seems like they have jumped on the pink bandwagon. Pink digital goods sell well in the marketplace so why not pink Lego blocks too?

Is there a Lego glass ceiling that so few Lego women have breeched? I can think of very few sets where a female character leads the way. Certainly the Batman, Ninjago and Harry Potter sets are huge sellers but it seems that Hermoine Granger Lego would sell quite well too. The distinctiveness of pink Lego bricks in the new 2012 Lego sets specifically targets young females and does little to encourage their male siblings to want their toy blocks. The new girly brand is called Lego Friends (quickly dubbed Lego Ladyfigs) and the Lego girl figures have properly colored flesh tones, facial features and modern hairstyles plus tons of pink attachments such as handbags, hair brushes and even lipsticks.

The Lego Friends line of merchandise moves the brand into the fashion play area whilst retaining some of its core creativity with brick building. The combination results in a very pink world with Lego pink characters such as Stephanie, Mia, Olivia and Emma plus the inevitable purple pink paraphernalia that comes with the houses, garages, salons, pets and convertibles.

Just Lego for Girls - The Ladyfigs

Girls do want their own brother proof Lego

The sets feature scenes such as a Splash Pool, Beauty Shop and an Outdoor Bakery. Maybe young girls want more exciting figures and as Lego are fond of products linked to motion pictures perhaps they might produce a Katniss Everdeen Lego set from The Hunger Games movie. Katniss and Roo figures would be popular, if perhaps too violent for Lego’s vision of a somewhat softer female society.

The Lego Minifigures Series 6 does have a few token girl figures such as the Intergalactic Girl and the Skater Girl but the vast majority of the 16 figures in Series VI are male. These include non-petite muscle bound figures such as Roman Soldiers, Highland Battlers, a Leprechaun, a Lego Bandit and a whole host more.

Lego say their research indicates that girls do want this Barbie style of Lego and not just a few token girl minifigures in sets. Feminists are not too happy with the Ladyfigs and dislike the Lego gender stereotyping. Lego are delighted with the increased sales figures. Lego’s mission statement of nurturing children’s minds by exercising their imagination comes under severe scrutiny because some parents think this Lego is easier to assemble than boys Lego. It does seem that the company, in opening this gender gap issue, with its new product range, has opened a can of worms not to everyone’s liking. My granddaughters, however, are delighted to have their own Stephanie with her cool convertible. My grandsons stay well clear of anything pink, including Lego. Nuff said!

Thank you wrapitup4me for the visit and comment on Girls Lego. My granddaughters love it and their brothers wont touch it either so all's well.

My daughters would have loved these pink lego blocks when they were young.

Lego have been quite clever with the pink bricks. my grandson will not go near anything pink, so no wonder his sister is happy with her new Lego. Thank you katiem2 for your visit and comments.

Awesome, I have two girls who love legos so these girl are something my girls will enjoy. My youngest is all about pink!

Hello BrendaReeves, thank you for visiting this Girls Lego article. My own granddaughter also loves this pink product so I guess the jury on the pros and cons of tailoring toys by gender is best left to the kids themselves. My grandsons don't touch her Lego, so she is happy.

My five year old grand-daughter would love these. She's a girly-girl and loves pink. 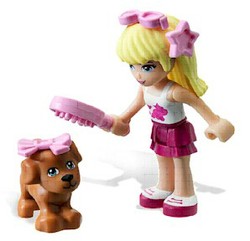