Lego minifigures have become very popular as collectibles since they were first introduced many years ago. Lego minifigs are tiny and can be concealed easily in a closed fist.

Lego men are small and can be pricey if you want specific characters such as Batman, Harry Potter, Superman or similar. The newest figures have the correct flesh tones and facial features (including hairstyle) and this makes them readily recognizable in the building brick community. Comic book heroes and movie stars are appearing as Lego men (and women) and are very collectible.

About 5 years ago Lego introduced dozens of these small Lego men as separate salable items in their own individual packaging (foil bags). Each character had a weapon or two with them. Non violent ones had appropriate wrenches, hats, skis, umbrellas and such like accoutrements instead of swords and shields. Each series launched had 16 totally different men (and Lego women) to collect.

Random choice: They were cheap Lego but it was a bit like buying a pig in a poke because you did not know which person you would get. It reminded me of the olden days when we had lucky bags with mysterious goods inside them. The first series was so successful that several more 16 set mystery-buy Lego products were produced.

LEGO Minfigures from the various series

A selection of Lego men and women from past series 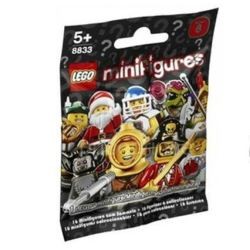 There have been 9 series so far. Each one contained 16 different minifigs to collect. The only exception was the special Olympic Minifigures which only contained 9 figures. It is best to have friends who also collect the same series as this allows you to trade your duplicates. You will ultimately find that you will purchase a figure that you already have. The bag containing the new figures are sealed and you do not know which figure you will get until you have made the purchase. A Lego Minifigures Series 8 Random Pack is shown opposite.

Please ignore advice on 'feeling' the packaging beforehand to try to guess which figure it contains. It simply does not work and the store assistant will not be too pleased either. Just take your chances and make sure you have friends willing to trade with you. The figures below from Lego Minifigures Series 6 and 5 are typical examples of what you can expect.

Lego minifigures run from Series 1 to 9

These small 2 inch superhero Lego figures cost more than $10 each, which is expensive for a very small amount of Lego. Larger scale Lego figures have been launched too. Fans of DC and Marvel comics will still want these unique figures and I expect the price of these collectibles to remain constant. Lego are very quick to the market place with new minifigures such as Superman and Batman, and do look out for this years Hobbit Lego, launched to tie in with the movie later in the year. Younger children, however, will be more than happy to open a mystery pack to find a new figure to love.

Thank you Tolovaj for your visit to and comments on my selection of Lego Minifigures. You are so right about the improvements on the minifigs and they are getting better and better with facial colouring and hair styles to match real life. The random Lego packs are great fun. However did we manage as kids? ;)

I still remember first Lego figures and how clumsy were they looking compared to these. Now we can't look at Mini Legos only as toys anymore. They are collectibles!
I didn't know about Mystery Lego series but it totally makes sens:)

These are just so darn cool I can imagine the many endless hours of creative play kids young and older alike will enjoy with these mini lego figures. Both my daughters have always loved small figures, they took them everywhere.

Hello TerriRexson, thank you for your visit and comment. We are a Lego household too and the stuff is indestructible. I bought used Lego and washed / steam-cleaned it and it was as good as new again. The minifigs are different because we often lose the small guns and swords etc.

We love building Lego models, but the minifigs always get played with the most.

A broad look at the various types of seashells found along the Florida coastl... 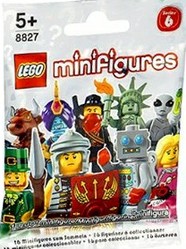 A broad look at the various types of seashells found along the Florida coastline and elsewhere.
100%  9   11 DerdriuMarriner
Other Collections