A review of the Lego Mania event at Milestones Museum in Basingstoke UK. Find out if it's worth visiting Lego Mania.

As I write this we've just visited Lego Mania at Milestones Museum in Basingstoke, Hampshire.

Lego Mania is a temporary Lego-themed event at the Milestones children's history museum.

My boys, aged 3.5 and 5, are Lego crazy so we had to go and visit Lego Mania. On this page you'll find our review which should help you decide whether it makes sense for you to visit.

The short version is, it was OK, we enjoyed what there was. But it could have been a lot better.

I've also included some ideas on what could be improved for the remainder of the event. We'd love to go back if they add a few more things for the kids to do.

We decided to visit Lego Mania on Saturday 25th February when it had been open for a few days. It was the first Saturday it was open and they clearly weren't prepared for the volume of visitors.

Hmm. A Lego exhibit on a Saturday in February - that's not likely to be popular is it ...

We had to queue outside for over half an hour when we arrived just after 11am (which was opening time.) There was nothing for the kids to look at. A few Lego posters would have made a big difference. Luckily our kids were very patient (though others in the queue were getting fed up, as were a lot of the adults.)

They should be opening at 10am or even better 9am on weekend mornings so you don't get everyone arriving at the same time. 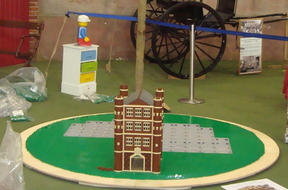 On the website there was a long list of activities at Lego Mania. We expected there to be Lego stuff throughout the museum, in fact it was hard to work out where we were supposed to be initially. Eventually we found a corner with Lego stuff.

There was a guy making a very impressive Lego model of Basing House (a tudor mansion.) Very cool, but not much was built yet, and it's not really a spectator sport. The really big bags of Lego bricks were impressive. A time-lapse video of the build so far would have been good.

There were a few small display cabinets with custom minifigures and old toys on display, and a few information boards to read. There was a big cardboard Lego figure that a child could put their head through and get a photo of them as a minifigure (quite fun.)

And there were lots of tables with Lego and Duplo for kids to play with. They did enjoy that, but its something they can do at home and after a while most of the Lego had been built with and you had to take things apart before you could build anything.

There was also a small TV screen where one child could play Lego Star Wars. (My 3 year old loves to watch Lego Star Wars so he enjoyed that.)

It was hard to spend much time at this area though we did our best to make the most of it. We spent some time building Lego models, but we do that at home most days! One cool thing was the range of colored bricks available, there were lots of colors we haven't got at home.

There was a large screen showing the Fastest and Funniest Lego Star Wars video. This was fun, but it's only a couple of minutes long and my kids have seen it loads of times. I assume they'll be showing different videos some of the time. It would have been better if there were a few different videos being played in sequence - this was the only one we saw while we were there. My kids enjoyed watching it on a big screen, but the screen was very high up on the wall.

You could pay extra to build your own Lego minifigure (like in the Lego shops.) We paid, but the queue was very long to do this and the boys had already queued very patiently to get in. When we went back it was closed for lunch. We had to skip this and get our money back. Surely they could have set up some more tables so more kids could get to this activity? And closing for lunch after everyone has only just managed to get in after queuing ...

There was a table with Lego colouring pages and pens (and a competition to enter, the prize was a pass to Milestones Museum, the boys would have been excited by a Lego prize.) The colouring was something we can easily do at home. This would be good for little kids visiting during the week though.

There was a display with lots of Star Wars Lego including a rotating death star. That was very cool. The boys would have loved to have seen more Lego like this. (We would have preferred it if the display was at child height, we had to pick our kids up so they could see it properly.)

One of the things we were looking forward to was the Lego Minifigure Hunt. We thought the boys would have to hunt for minifigures throughout the museum. Instead the same laminated minifigure picture appeared in a few places above a toy like building blocks or a jigsaw. Each time the boys found one they were really disappointed to find something other than Lego. They would have loved to have looked for different minifigures around the museum and tick them off.

Here's a video of the Star Wars Lego display at Lego Mania. Please don't show it to kids before you visit as it will take the excitement away. But I've included it to give parents an idea of what they can expect.

There were some newer Lego sets in the shop including the new Lego Friends range for girls,  Lego Ninjago Snakes theme sets, Lego Star Wars sets and the new Lego Duplo sets for toddlers and preschoolers.

The sets were at full retail price so we didn't buy anything. You can get some of these sets cheaper at the Amazon Lego Store. They did have the Lego Star Wars Battle of Hoth Game, but we already have that. It's pretty hard for us not to buy Lego. I'm not sure how they managed to not have anything we just had to buy!

"There wasn't much Lego was there?"

Once back at home the boys played with their Ninjago Lego and then watched Clutch Powers on DVD. These are kids who love Lego ...

Is Lego Mania Worth the Money?

Lego Mania costs £22.75 for a family of four, going up to £25 in April. I think this is the real problem. It's quite an expensive outing so expectations are high. We have a Hampshire Culture All Pass so we didn't have to pay extra to get into Lego Mania, but Lego Mania was part of how we justified the cost of the pass.

We certainly had a nice time there. But to be honest it's pretty hard not to have a nice time when we go out as a family, my kids are pretty easy to please! They had a far better time when we visited the Lego store in Cardiff recently though. And that was free. We just spent money on Lego and got to bring it home!

If you have kids who like Lego and live nearby then you'll probably want to check it out and it is enjoyable. If you have a Culture All Passport and can get in without paying extra then it's definitely worth a visit. Just don't set your expectations too high, and only go if you can afford it without stretching your budget. (Otherwise just buy a small new Lego set and have a fun day at home.)

The event felt like an attempt to use Lego to get people to visit Milestones Museum and take interest in the displays there. For us it had the opposite effect. The presence of Lego made the rest of the museum uninteresting because it wasn't Lego (the boys would have loved the museum normally.) And there just wasn't enough Lego to justify the entrance price.

On the other hand, how can you not enjoy a Lego themed event? We loved what was there. I'd like to go back and see the big Lego model of Basing House when it's further along. If you're happy to spend some time building Lego models with your kids and taking time to really enjoy the Lego Star Wars models then you can spend well over an hour there. (Longer if you explore the rest of Milestones Museum.)

When is Lego Mania at Milestones Museum?

Please check the Milestones Museum to confirm opening times. At present it opens at 10am Tues-Fri and 11am Sat-Sun.  That's right it doesn't open until 11am on Saturday and Sunday - the main days that school age kids will want to visit.

What would make Lego Mania Better?

With a few improvements, Lego Mania could be a much better outing. Here are a few things we would like to see (and which might make us plan a return visit.)

We'd love to have a Lego Discovery Centre nearby. And judging by the queues today there's a real demand for Lego-themed activities. If we see that some more activities have been added at Lego Mania we'll probably go back.

How are Lego Bricks Made (For Kids)?
Have you ever wondered how Lego is made. My son did so I promised I'd find out how they make all those Lego bricks.

Tips and Ideas for Kids Attraction Owners
Ideas to help kids attraction owners to provide a great experience for kids to keep them coming back. Parents please add your own tips.
Updated: 02/25/2012, TerriRexson
Thank you! Would you like to post a comment now?
3

Have you visited Lego Mania? What did you think?

Loved your son's take on it all!

A really well written review - so comprehensive, thank you.
We had a day out at Milestones a few weeks ago, and thought about coming back for the lego event, but after reading this we'll save the money and go to Legoland in good weather instead!

This is a great review. You put a lot of detail in it. I can't stay focused enough to be that detailed when I write them. 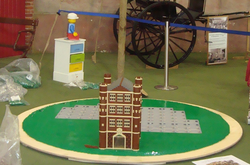