Lego Ninjago is a very popular new Lego range. Here's a guide to the Ninjago universe for parents and gift-givers.

Ninjago is the name of a popular Lego franchise based on Ninjas, it includes a range of toys, the Spinjitzu game and even a new TV show. Ninjago is also the fictional setting for the range.

There's a lot to the Ninjago theme and it can be a bit confusing for parents and gift-givers so on this page we'll take you through the Ninjago universe. By the end you'll be able to have in depth conversations with boys aged 4-14 and you'll know just what to buy them for Christmas!

The Ninjago Back Story

Ninjago has a rich back story, and even a creation myth. Ninjago was created by the first Spinjitzu master (Spinjitzu is a martial art) using the four golden weapons of Spinjitzu.

When he died his two sons took responsibility for the weapons, but the older brother was consumed by darkness, he was banished to the Under World and became Lord Garmadon. The younger brother, Sensei Wu, hid the weapons and gave a map of their locations to an honest man.

The honest man's son Kai is the main hero in Ninjago. Along with his sister Nya and fellow Ninjas Zane, Jay and Cole.

Lord Garmadon cannot leave the Under World. He is represented by Samukai and the Skeleton Army.

The Lego Ninjago Fire Temple is one of the main Ninjago Lego sets. It features several of the key Ninjago characters as mini figures so it makes a good starter set for recreating the Ninjago universe.

Mini figures are spun on spinners and battle each other. The game involves cards and winning weapons.

The Spinjitzu starter set includes everything you need for a Spinjitzu battle including two spinners - Jay and Bonezai.

But Kai is the hero, most kids will want a Kai spinner. Though girls will like Nya his sister. Sensei Wu is also very popular.

Watch the video to see how the Spinjitzu game is played.

Lego Battles Ninjago is a real-time strategy game where you have to build an army of Ninja warriors. This is an indepth complex game, better suited to older Ninjago fans.

Ninjago fans will enjoy the movie which is very well animated and fills in lots of the story of the Ninjago universe. My kids love to recreate scenes from shows they have watched.

Lego Ninjago 2012 - Snakes
Have you seen the new Lego Ninago 2012 theme? It's the year of the snake. There are new snake enemies and who is the green Ninja?
Updated: 11/13/2011, TerriRexson
Thank you! Would you like to post a comment now?
2

Did you learn something about Lego Ninjago?

@Eve Just click on the Spinjitsu Starter Set in this article.

Hey I´ve took some time to understand this story....
but I don´t know where to find the sets for the ninjas... my son is asking to give him the spinjitsu set ....where can I find it?

Thanks for explaining this Ninjago stuff. I've never understood it myself.

These look like such fun for boys (and maybe some girls) who like Legos and ninjas! Too bad my boys are grown -- they would've loved this set. 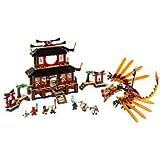