Two grooms in Mexicali did everything by the book. Their wedding day was ruined when officials called a halt following a legal complaint concerning both grooms' mental health.

Wedding days are fraught enough with nerves, without groups of protestors outside the doors waving banners insulting your very humanity.

And especially without your ceremony being stopped, because said protestors have issued a challenge in the courts regarding your mental competence to marry.

Yet that is precisely what happened to Victor Manuel Aguirre Espinoza and Fernando Urias Amparo, when they attempted to marry in Mexicali, Baja California. It brought them face to face with a local Christian group equally determined to destroy the marriage.

The backlash has been felt around the world alongside the hashtag #MisDerechosNoSonLocura (My Rights Are Not Crazy).

A supreme court ruling was supposed to pave the way to married bliss in Baja California. But officials and Catholic campaigners have other plans, including bomb threats.

Gay marriage has long since been legal in various parts of Mexico. But not in the Baja Californian Mexicali City.

There anti-equality protestors forced a law stating that same sex weddings were not permissible.

Then a Supreme Court judgment proved them wrong. Such provision was unconstitutional.

That challenge in the highest courtroom in the land had come from lawyers representing Victor Aguirre Espinoza and Fernando Urias Amparo. The couple had been together for a decade. Both are successful entrepreneurs, who work hard in their hair stylist business and pay their taxes. Now they wished to demonstrate their commitment to each other with a wedding ceremony.

It took nineteen months for proceedings to reach that point.

Finally, on November 21st 2014, they were all set to wed. The couple knew they had done everything necessary for this to become a legal reality. They'd retained their lawyer to ensure that every 'i' was dotted and 't' was crossed.

A huge party was planned, bought and waiting to celebrate their nuptials.

Like any prospective newly weds, on the dawn of their big day, there were nerves. Not helped by the fact that they were about to make history in their city, hence the press would be waiting to cover it all.

The grooms arrived nervously jubilant and resplendent in brand new, matching white suits. Then picked their way through a small crowd of Catholic protestors lining Mexicali Town Hall steps. Prayers calling upon God to thwart their marriage assailed their ears, but hand in hand the couple made it safely inside.

The room was packed. Paparazzi camera flashes blinded their way. Family and friends filled the seating, all smiles and glee at the hard fought ceremony about to be performed. A judge sat awaiting their approach down the aisle, willing and able to pronounce them groom and groom.

A few moments later, Victor was sunk sobbing in a chair. Fernando's hand touched flat against his back in comfort, but he was powerless to do much more than watch their lawyer argue their case with a registry official.

Rosa Maria Real claimed to know nothing about any high court injunction to allow them to marry.

Despite the media frenzy, protestors at the door, assembled wedding party and their names in the registry for weeks, she refused point blank to allow the wedding to take place.

While increasingly outraged wedding attendees watched on, the couple's lawyer produced document after document proving this was a legal fact, but registrar Rosa Real was implacable on the subject.

A move was made to contact officials at the Supreme Court to order her compliance, or else report her for criminal obstruction.

At this point, she announced that a bomb threat had been made. The whole building was to be evacuated. All ceremonies cancelled for the day.  Victor and Fernando held their reception party anyway. It would be a shame to see all that food go to waste.

Unable to thwart the couple with existing laws, another was created - mandatory counselling sessions for all wishing to wed in Mexicali City.

That was round one. Round two began with equal distress and cross words exchanged, between a couple desperate to marry and a Catholic counselor refusing to even acknowledge their attendance at her session.

Mexicali City ordinance had swiftly been tightened to refuse marriage for any who had not attended mandatory counseling. The mass sessions were hosted by a hard-line Catholic couple, who issued dockets to prove that individuals had been to one of their mass workshops.

Victor and Fernando duly turned up. A friend captured on film what happened next.

For those of us unable to understand the Spanish exchanges, the synopsis is this:

Angelica Guadalupe Gonzalez Sanchez is the lady refusing entry to the pre-wedding counseling group, which she runs with her husband. (He was seen earlier on, explaining that the session is for heterosexual couples only.)  Fernando remonstrated with her, as did the couple's legal adviser. But she denied them any opportunity to receive their attendance ticket.

They needed that in order to marry.

Senora Sanchez is also the president of the Coalition of Baja California Families - the Christian group spearheading the fight against same-sex marriage - who had orchestrated the praying on the steps on the couple's first wedding day.

Did Victor and Fernando seem unduly 'aggressive and impertinent' during this confrontation? Sra Sanchez said they were. She's filed a complaint within her professional capacity as mandatory pre-marital counselor stating that they are insane.

She based it all on the incident depicted in the footage above.

On January 10th 2015, Victor and Fernando turned up for their second wedding day.  A municipal official - Jose Felix Arango Perez - met them at the aisle to deliver the bad news. They could not tie the knot, until the legal challenge to their sanity had been met.

Mad people may not marry in Mexicali City.

My Rights are not Crazy - #MisDerechosNoSonLochura is the hashtag used on social media to protest the ongoing obstacles to the first Mexicali gay marriage.

Cyber protestors - and those on the ground - are currently besieging Mexicali City officials with the slogan 'My Rights are not Crazy'. 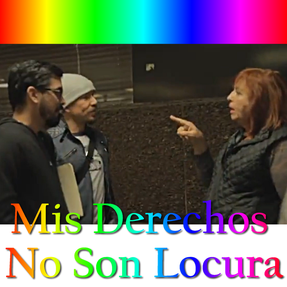 The ongoing, and increasing bizarre, barriers to allowing Victor and Fernando's marriage to ensue has brought the issue to the attention of international readers.

I'm writing this from Britain for a start.

Social networks have erupted to the hashtag cry of #MisDerechosNoSonLocura - my rights are not crazy - in support of the couple. Suddenly the whole world is watching, as they stage yet another fight against the system, in order to secure what should be their right.

It's not envisaged that the delay will last for long this time. Their paperwork is still in order and there's plenty of evidence to prove that they attempted to attend the mandatory counseling session prior to their second wedding day.  It wasn't a factor in their first.

Moreover, their business continues to function without anyone querying their mental health. It will only take a single psychologist to rule them fit and healthy to wed.

All looking on wonder what strange obstacle will be thrown into their bid for the aisle next. Because their Christian opponents are refusing to give up and their tactics are spawning a backlash of international proportions.

Civil rights should never be deemed crazy. They are rights. And the couple fight on for their wedding day.

Archie Gay Marriage Comic Sells Out in Toys R Us
One Million Moms launched an anti-gay marriage boycott. The rest of the store's customers voted with their wallets.

Inexpensive Gay Pride Wedding Rings (Or Engagement Rings for Gay Couples)
The love and commitment is real, yet there's another kind of Pride to exhibit in your same-sex union. These gay wedding rings score political points, cheaply!

What to Write in a Wedding Card for a Gay Couple
Do you know what to write on a greeting card for a gay wedding? You would be amazed at how many people don't! But I have some inspiration for you right here.

Wedding Gifts for Gay Men
Are you looking for gay wedding gift ideas for two grooms? Check out this selection with presents to match any wallet.
Updated: 01/13/2015, JoHarrington
Thank you! Would you like to post a comment now?
3

If anyone creates hell on Earth, they should not be too surprised if that is where they finish up when they die.

I think the events in Paris and Belgian just recently are testimony enough to me. I think that if anyone feels the need to kill, maim or deny the rights of anyone in the name of their religion, then they really need to be taking a long, hard look at their religion. Is it worth defending anything that requires so much blood and misery?

From all I know of Jesus Christ, Allah and all those wonderful wisdom bringers, there was no directive for discord, let alone fighting and denial of civil/human rights.

Without freedom of conscience we create hell on Earth.

I'm nodding right along with you in agreement here. It does seem incredible to me that such laws aren't applied universally.

It is essential that gay couples enjoy the same legal protection as heterosexual couples. That their home country would not honour a wedding from another part of the country is morally wrong and a serious flaw in Mexico's political system.

Beyond the politics, there's further life issues. Married couples have certain rights, like joint insurance, health access etc. If the couple married in a different county, then their own home county wouldn't honour it.

As for the rest, then I'm nodding here in utter agreement.

I am not impressed by either side in this case. The couple could have married elsewhere in Mexico and left confrontation out of the wedding, which is not the place for it. On the other hand, the group opposing them are to be seriously criticized. Lying about bomb threats, and officials refusing to do the duty they are paid for are wrongful acts. If the courts had permitted the wedding it should have gone ahead and no official obstructed it. Worse is to make false accusations about the couple's sanity. Don't the accusers know that the church teaches that lying to harm someone is a serious sin?

This is the perennial problem with fanatics: they are so obsessed with their goals they deny their own principles to attain them. To protect heterosexual marriage, which was not under threat anyway, they have lied, disobeyed the law and misused power.

You and me both. The opposition does seem to be getting a little desperate now. I wonder if the couple could have them for harassment?

Wow. How frustrating. I hope the global outcry does do a lot for helping them get their rights without having to get around any more ridiculous and unnecessary obstacles.

One Million Moms launched an anti-gay marriage boycott. The rest of the store... 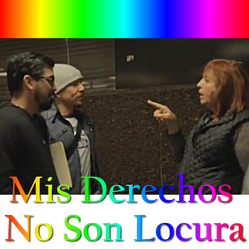 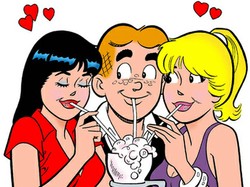 One Million Moms launched an anti-gay marriage boycott. The rest of the store's customers voted with their wallets.
100%  54   13 JoHarrington
Gay Rights