Policy direction in the Middle East is a hotly contested issue. US Constitutional rights however, are not. We must defend them now with a single loud voice.

Here in America, we possess a right to speak freely. It is a right that we have treated with the utmost reverence. All of us, regardless of our economic station, religion, race or political affiliation, have learned to be peacefully tolerant of those who would say the most hateful things about us.

If there is anything in our history that truly sets us apart from the entire world and its history, it is our near fanatical commitment to preserving the right of each man and woman to speak freely; especially on matters that are religious and political in nature.

Now, according to Reuters, a government official from Pakistan has called for the killing of an American Citizen for speaking his mind within the confines of our borders. (see link below).

This is an outrage of monumental proportions. This is not a rogue terrorist or wayward religious cleric. This is a government official of a supposed friendly nation calling for a mob hit on an American.

Nakoula Basseley Nakoula is a really bad filmmaker. His point of view is warped and hateful. Indeed, most all of us would never in a million years defend this guy’s point of view. However, what we ALL must do is defend his right to express it.

Today, Nakoula Basseley Nakoula needs to become one of us. The threat leveled towards him must be considered a threat leveled at each of us personally.

The Details of This Criminal Outrage 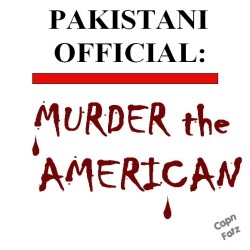 According to this Reuters Article,  Pakistani Railways Minister Ghulam Ahmad Bilour has offered a $100,000 reward to anyone who murders Nakoula Basseley Nakoula.

The reason? Nakoula insulted the prophet.

In fact, he goes on to say, "I invite the Taliban brothers and the al Qaeda brothers to join me in this blessed mission."

Later in the article, Reuters points out that Egypt's Abdel Ghaffour, leader of the Salafist Nour Party, has urged Egypt's President to demand "legislation or a resolution to criminalize "contempt of Islam as a religion and its Prophet" at the U.N. General Assembly

This is About YOU and YOUR Family 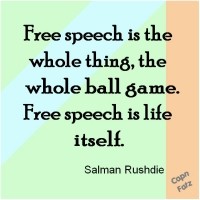 Forget the bozo who made this movie.

Imagine a son, daughter, nephew or niece, who in a moment of youthful passion and silliness, takes a stand on a religious issue and creates a cartoon that some find offensive.  Imagine that they posted this on their Facebook page.

Now imagine a government official in a foreign state offering a reward for their murder.

I don't know about you, but that's not a comfortable thought for me.

In addition to the fear, I would be incredibly angry.  I would want and beg for your help. I would call on my government to defend my loved one vocally and publicly and in front of the entire world.

Here's the thing... Free speech does not exist if you must fear for your safety when exercising it.

Failing a firm and unequivocal response, we have one more reason to rationally fear reprisal for exercising our rights.

What We Must Do 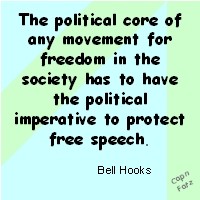 Our political differences our numerous. Our debates are robust and the rhetoric often gets heated. We, on the America's political right and left,  fight hard for what matters to us.

However, despite our passion, we have established a contract with one another. We have determined that the ends do not justify the means and that when the dust settles and a decision has been made, we will each retreat to our corners to once again begin our peaceful quests.

Right now, we must make it clear to Pakistan and the globe that we do not take threats towards American Citizens who have legally exercised their constitutional rights lightly.

We must make it clear that we will not tolerate the murder of an American Citizen who has exercised his or her constitutional right to speak freely in this land by officials of foreign governments.

We must make it clear, that any attempt to do so will be met with swift retributive justice. It must be made know that while we will seek the cooperation of a world community, we will ultimately act to protect our constitution with or without that cooperation.

We must call on both Obama and Romney to responsibly speak to this issue with a single voice and in so doing, establish that American elections are not a shelter to those who threaten our constitution.  It must be made clear, that despite the result, a would be enemy will be met with the same firm and decisive response to an infringement upon our rights.

More, we must make it clear to our President and his challenger,  that this rises well beyond their politics and personal political aspirations.  They must be made to know the we the people, consider this to be a sacred responsibility of any man or woman who wishes to lead our nation.

Share the Reuters article, write a blog and share it, or share this blog.  If we each do this, there won't be a social media page that doesn't make mention of this.

Visit news sites, be it MSNBC, Fox, CNN, the Huffington Post, the Blaze, Brietbart or the DailyKos. Leave a comment or two calling for action. These sites will make important what you tell them is important.

Contact the White house and the Romney Campaign directly.

Avoid making this about Romney or Obama... what they did do or didn't do.  Make this about your right as an American to feel safe from harm when exercising your right to speak.

Thanks for the kind words

At this point, I do not know your background but I would like to congratulate you on a well thought out and well presented essay. You have expressed yourself with an excellence that should put many of today's journalist to shame. I was particularly impressed with how you spoke to all Americans who love this country and it's freedoms (no matter what their political views). You did not take sides or point fingers, but just implored all citizens to take up arms (using the weapons of pens, keyboards and voices) for this noble cause.

I will take up this call to defend our Freedom of Speech and encourage others on all my networks to do the same. We must rise up with a loud united voice that can be heard around the world so that all who demand our freedoms be limited and restricted according to their desires can hear us.

I beg of all who hear this call to restrain their impulses to use it as a platform to support their candidate. We all need to fight for the candidate of our choice, but not here. The world needs to hear our united voice, for it is the unity of voices from all political affiliations joining together to defend our freedoms that will gain the attention that help our cause.

Yes. As the world gets smaller, the need to reconcile that various cultural differences becomes more urgent. Best wishes to you as well. 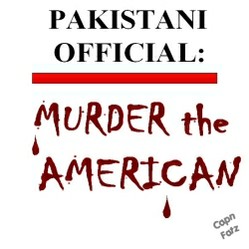