Prophet Muhammad Halloween Costume to be Outlawed in NYC

Following the recent soft drink ban and middle east riots over a badly made video, Mother Bloomberg has announced an extension of her campaign to protect the weak minded.

Hardly. In the aftermath of the tragedy in Libya and the chaos in Egypt, the administration decided to blame a badly made and offensive video for the lawless behavior we all witnessed.

Yep, that's what they did. The leader of the free world reduced Muslims to children that are incapable of controlling their behavior.

Such a thing seems to be the trend these days.

We recently learned that New Yorkers are children too. Apparently the temptation to let a four year old suck down a 44 ounce bucket of Coca Cola is just too great for weak New York City parents to resist.

Before that, San Franciscans were protected from Happy Meal toys.

Yet the Nuttiness is Logical

Unfortunately, Bloomberg and the Obama administration come from a place that is very consistent with the political direction we've been moving towards.

You can't, for example, demand that health care be an entitlement without surrendering power over the very personal decisions about what you eat and do with your body.  If the cost for your health care is to be shared with your neighbor, your neighbor rightfully has an interest in your lifestyle choices.

Obama's response to the middle east protests and violence is similarly consistent.

We live in a place where many of us are increasingly demanding a right to feel good about ourselves and when we don't, we demand government action.  Indeed, speech is increasingly being restricted in response to these demands.

Valedictorian speeches must be approved to avoid offending religious sensibilities.  Kids wearing T-Shirts with the American flag are sent home because they may offend fellow students celebrating Cinco de Mayo.

Lest you think that abridging speech only occurs in schools, lets not forget the attacks directed towards speech because a lunatic shot Gabby Giffords.  Within hours of the shooting, pundits, politicians and commentators had established that conservative radio voices and cable news personalities were at fault.

The message here is clear. There are those that have come to believe that free speech causes people to have low self esteem and act violently and therefore ought to be restricted.

Is it any surprise that a piece of crap video is to blame for unrest in the Middle East and that mainstream pundits have suggested that the producer be held accountable?

Where are OUR Demonstrations? The streets should indeed be occupied right now. They should be occupied by everyone who takes offense at a Nanny State.

Yet here we are.

In a country that once rightly decided that abolishing booze was a bad idea, the Mayor of an American city makes selling a 32 ounce Coke unlawful.

In a country that once truly cherished diversity, we're killing it.  You see, diversity is not about 'celebrating' differences, its about civilly tolerating those differences despite the fact that they may bug the snot out of you.

That's true tolerance. Its the kind of tolerance that our founders demanded when they declared that the government shall make no law...

Alas, we're not tolerant. The mention of God by a young girl during graduation or the wearing of American flag by young men is something that can cause offense and is prohibited.

And now? The making of a film with a religious statement (albeit insensitive) actually causes violence around the world.  Surely such speech should be prohibited too.

When exactly do we stand up? When do we surround the government and its patrons and declare, "Enough!".

Do we wait until the pulpits are censored because this group or that is hurt by the message?  Perhaps it will occur when your local radio station is forced to carry an hour of Olbermann for every hour of Levine. Or will it take being taxed into a diet of rice and broccoli to finally get us wrapped around an axle?

I have no idea what that trigger is, but I do know that our American heritage is not what makes us free.  In fact, American freedom reached a zenith a long time ago and has been in a steepening decline for decades.

More, that decline will continue until a line is crossed and outrage is expressed.

The real question is if will we be smart of enough to express that outrage when it is still lawful to do so, or if will we wait until we must become 'criminals' to defend ourselves from an oppressive state?

I pray that we act soon, in a time when action does not require violence.  I pray that we act peacefully and forcefully now so that we don't leave future generations with a bloody fight to restore what was long ago declared to be self evident truths.

Thamisgith.. I'm am American and I usually don't get New York at all :). In any case, thanks for dropping by.

I'm a Brit - so I didn't quite get all the NY references. Even so, I think I get the gist.

Sorry to say that we have got just the same mindset over here these days.

Well said by the way.

@Triggered - Good point and I really don't know what the readership will end up being. While I'm fairly convinced that my audience will be English speaking, that's pretty broad group. For all I know, I could end up being a rock star in that new capital of English-dom known as India. :). Seriously, the real audience for an opinion like this is just a subset of America... perhaps a narrow one.

Ooooph, what a fiery proclamation! I don't necessarily agree with all your sentiments, but I'm glad to see an article expressing an opinion instead of Just Another Sales Piece.
I'm wondering what percentage of your readers actually is American? Just a thought :) 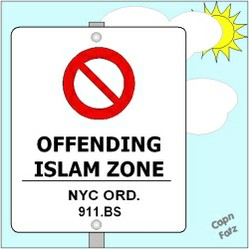