We Who Choose Liberty

There are Democrats and there are Republicans. Then there is us. The ones who consider one thing when we choose sides. We measure liberty. We know exactly where we stand.

We're your parlor jokes. We're the impractical utopians who don't understand how the world works. Be that as it may, we are also firm and committed.

Our strength comes from our position and from that position, we shall not be moved. Political trends shift with the winds, but not us. We are firmly rooted in fundamental truth.

Some of us are conservative and have found some kinship within the Tea Party. Others lean left and have filtered into the Occupy movement. But ALL of us, to a man and woman...

"hold these truths to be self-evident, that all men are created equal, that they are endowed by their Creator with certain unalienable Rights, that among these are Life, Liberty and the pursuit of Happiness. "

This is our creed. The rights are ours. Debating about it is useless because we're telling you it is self evident. If you have a pressing need to turn this into an argument involving fairies and pins, you're wasting your breath.

The rights are ours. We regard those who stand in the way as thieves.

We're the true believers; the only real political radicals this planet has known.

We're the only ones that mean it when we say that a man is fully capable of governing himself.

What We Believe About Government

"That to secure these rights, Governments are instituted among Men, deriving their just powers from the consent of the governed"

We believe that the Constitution (as explained by Federalist Papers) is the means to that end.

Our Constitution is one that is plainly understood by mortal men.

The constitution that must be interpreted and modified by temple priests is of no use to us. Such documents are a danger to liberty and become subject to shifts in the political tides.

We are Diverse but United

We often argue amongst ourselves. Some are Democrats, others Republican and still others have taken shelter under a Libertarian banner. Some of us are pro-life. Others pro-choice.

What unites us though, is our firm agreement that we need to move towards smaller government and increased personal liberty.

We who choose Liberty don't buy into Happy Meal laws. We think people should be able to drown themselves in carbonated soft drinks if they so choose. We have NO problem with a man who wants to scream down the highway on his Harley with no helmet on.

We don't care who you sleep with or how many you sleep with. We're fairly convinced that you ought to be able to wipe your hind quarters with the American flag if you want to.

We're for a strong defense, but see no particular need to subsidize the defense of Europe. We hated Gaddafi, but still can't figure out how our constitution is served by helping to oust and ultimately kill him.

We mean it when we say we stand for liberty.

We abhor both. The pox on both your houses.

Where We Want To Go

We're not into this collectivist nonsense offered by both the left and right.

Being the most powerful nation doesn't do it for us, nor do we get that warm tingly feeling by being the most compassionate nation.

Being the freest nation does matter. Choosing to live our short lives on this earth in a manner that satisfies us personally is everything.

You Republicans and Democrats are jacking that up. We want you to stop.

How We're Going to Get There

We're with the founders on this as well...

"Prudence, indeed, will dictate that Governments long established should not be changed for light and transient causes; and accordingly all experience hath shewn that mankind are more disposed to suffer, while evils are sufferable than to right themselves by abolishing the forms to which they are accustomed."

We will fight within this bastardized system. We'll infect your Tea Parties and Occupy Movements.

We're confident in the immortality of our self evident truths. While they may hibernate during a cold winter, we look forward to them roaring forth in the spring.

You see, our message need not be appealing or persuasive. We need no one from Madison Avenue to spin it or focus groups to test it.  We need none of that because our message is true and resonates within the heart of every man.  More, its incredible simplicity does not require complicated explanations or pretzel making logic.

Simply put, a man is perfectly capable of governing himself.

In the short term, we're not much. We're the parlor jokes. We're the impractical utopians who don't understand how the real world works.

However, in the long term, we are the nightmare of every entrenched Democrat and Republican. We're the nemesis of every man who seeks to secure his station by misusing and abusing our government.

Your comments are welcome 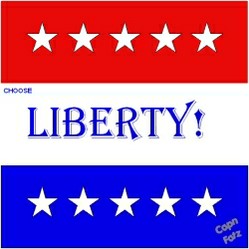