Pirates! Band of Misfits is a new film from Aardman Animations. It's a 3D stop motion animated movie and will be fun for all the family.

An Adventure with Scientists

Pirates! Band of Misfits from Sony Pictures is due to be released in March 2012 so it's still in production at the moment. We do have a wonderful trailer to watch though. It looks like a fabulous, humorous, historical romp full of pirate cliches.

The quality of the animation is superb. I love the Pirate Captain's beard.

The tagline is suitably groanworthy: "It's a Plunderful Life". Oh dear!

And the movie will feature voice overs from some brilliant British actors including Hugh Grant, David Tennant and Brian Blessed.

David Tennant (yes Doctor Who) will play a young Charles Darwin
Hugh Grant (Four Weddings and a Funeral) is the lead character, the Pirate Captain
Brian Blessed is the Pirate King
Salma Hayek is Cutlass Liz

Based on The Pirates! An Adventure with Scientists

Pirates! Band of Misfits is based on Gideo Defoe's The Pirates! An Adventure with Scientists. The book is a very silly pirate story. Several reviewers liken the humor to Monty Python. Or maybe Terry Pratchett. Here's a taster from the publisher's description:

"While searching for some major pirate booty, he mistakenly attacks the young Charles Darwin's Beagle and then leads his ragtag crew from the exotic Galapagos Islands to the fog-filled streets of Victorian London. There they encounter grisly murder, vanishing ladies, radioactive elephants, and the Holy Ghost himself. And that's not even the half of it."

There's a new movie-tie in version of the book available with a cover that matches the movie.

The Pirates!: An Adventure with Scientists

& An Adventure with Ahab

The Pirates! Band of Misfits on Wikipedia

The Pirates! Band of Misfits, also known as The Pirates! In an Adventure with Scientists, is an upcoming 3-D stop-motion animated film produced by Aardman Animations for Sony Pictures Animation and slated for release on March 30, 2012. It ...

Curse of the Were-Rabbit and Chicken Run

Aardman Animations is a British animation studio based in Bristol. They are famous for Wallace & Grommit and more recently Chicken Run. I have enjoyed their shorts and films since Creature Comforts.

The films are made using painstaking stop motion animation with clay models, moved a tiny amount in each frame. If you haven't watched Aardman's earlier films why not check them out while you wait for Pirates! Band of Misfits to be released?

Playmobil: The Secret of Pirate Island (2009)

Another Pirate Cartoon to Watch

If you're looking for another pirate family movie to watch while you wait for Pirates! band of Misfits then we recommend Playmobil: The Secret of Pirate Island. This movie is set in the Playmobil universe and is a great family movie full of adventure on the high seas.

Pirate Ship Cake
Instructions for making a pirate ship cake with template, pictures and recipe. Quite easy to make but looks very impressive.

We're expecting Pirates! Band of Misfits to be one of the hit movies of 2012. It's got humor, a wonderful cast, amazing animation and of course Pirates! What could go wrong? I think we'll be enjoying this film as a family. There's definitely plenty of pirate action to keep the kids amused and the adults will appreciate the humor and historical references.

What do you think about Pirates! Band of Misfits? 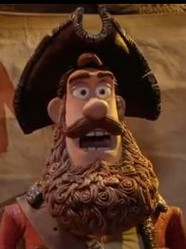