With ghosts and ghouls around, who knows what manner of creature will attempt to jockey your dog this season! Preempt it with these great dog rider costumes!

Don't let your faithful companion miss out on the fun this Halloween. As you go trick and treating, your pooch could look the part too with a little ghostly addition.

From the headless horseman to the pumpkin fiend, there could be a scary rider on your dog. They look amazing and will no doubt elicit much comment out on the street.

Plus it will stop any other entity leaping into place. That seat is taken! So saddle up your canine buddy and let the party begin!

Horse hooves thunder down a quiet country lane, piercing the silence of the night.  You step back into the hedge, clearing the road for the rider to pass.  You glance back and you scream!

This horseman is headless and it's closing in on you!  A ghostly remnant of some ghastly past! You flee!  But who can outrun the otherworldly hooves of this terrible horse?

Apparently the rider itself can, as it needs to hitch a ride on your dog.

The adjustable straps allow for the saddle to be attached to a variety of canine sizes.  The very small might find it too large, and the horseman will appear a little lost on a gigantic hound.  But all breeds in the middle will be able to wear it perfectly.

Headless horseman seem to be the thing this season, as here is another ready to gallop into the party on the back of your dog. And by gallop, I mean sniff around the edges, wander over to the buffet table, wait patiently for its mount to finish begging etc. You know how it goes.

This Halloween headless horseman dog rider is designed for large canines. They need to be measuring in at 18-22 inches from the base of the tail to the base of the neck, and weighing around 25-30 pounds.

Made by the same people (and apparently with the same doggie model!) is this beautifully scary pumpkin dog rider for Halloween.

As with the dog ghost rider, it's created out of polyester and plastic, with all the same dimensions and features. The Jack O'Lantern dog rider costume is much more colorful though. You can practically hear it cackling into the dark Halloween night.

Unfortunately, they've missed a trick by not including sound.  Mind you, your pooch would probably not be very happy with something emitting eldritch laughter on its back.

I love this one too, but I still find the ghost dog rider funny!

Of course, we're in danger of seeing these Halloween terrors from a very human-centric point of view. What is the scariest, most monstrous menace out in the shadows for most dogs?  Cats!

This poor pooch has a witch's black cat perched on his saddled back, as his Halloween dog costume. Back arches and hissing too. *shudders*

The Black Cat Rider costume for dogs at Halloween comes in one size. It's designed for medium to large canines.

Halloween Pumpkin Costumes for Dogs
Looking for a canine Jack O'Lantern suit for this night of ghoulish madness? These are the gourd-liest Halloween dog outfits around!

Halloween Witch Costumes for Dogs
All witches need a familiar. But who's to say that the four legged one can't be the magical being, with a human familiar? Certainly not the canine in this costume!

Halloween Devil Costumes for Dogs
It brings a whole new meaning to the term Hounds of Hell! Grab a canine devil outfit for your dog to share in the Halloween fun!
Updated: 09/08/2014, JoHarrington
Thank you! Would you like to post a comment now?
11

I've had a few people look at it and think Sleepy Hollow. It's definitely an item for a Sleepy Hollow dog costume then!

The Jack O'Lantern is cute too though.

These are so cute. Reminds me of Sleepy Hollow with your pooch as trusty steed. Although I love the headless horseman, er, dogman, costume I think the Jack-o-Lantern rider is my favorite.

Wow! I love your saddlebag idea! Go and get it made up and patented!

Those are so cute! Canine Halloween costumes are a great idea, and even some saddlebag so they can carry home the candy!

That would absolutely own! I'm just imagining all of them running together in their outfits. Please do take photos, if this happens.

As for Bear, check out the Devil Dog Costumes. There was one in there which would fit a Great Dane, so has the potential to fit your huge dog too.

Paul- My brother's dog is a black lab, and he's exactly the one I was picturing for this!! XD Her name is Queen.

And Jo, I really might get costumes for the dogs. Finding the perfect one for my other brother's dog will be difficult though. He is a massive yellow lab. Pause and think of the biggest lab you've ever seen. Bear is bigger. (And he was named Bear before anyone knew how HUGE he'd end up being. I like to think of it as a self-fulfilling prophesy of sorts, be careful what you name your dog! :O)

LOL- Now I really want to get costumes for them all and then take all of them to the dog park and take pictures. Bud and Miley are my mom's dogs, and Bear who is technically my brother's dog but he's moving around for a while doing travel nursing so my mom watches him for now. And my other brother has Ace and Queen. And Ace and Queen and Bear are all friend's with a dog named Lily so she'd need a costume too. It'd be a whole pack of dogs dressed up for Halloween. It'd be an absolutely fantastic sight to see, so now I just really want to do this xD (I have to talk respective dog owners into buying them the costumes, but I think if I give it the right spin...aka Pack of dogs dressed up for Halloween!! I just might convince them ;P)

Which one? Oh! Yes, that would look really good. Please take a picture if you do get one. :)

I'd love to see my black lab wearing that - the straps would be hidden and everything!

If you get one, you'll so have to get us a photograph! I think they look amazing. :)

I SO have to get the headless horseman one for my brother's dog. I saw the bottom picture first, with just the jack-o-lantern, and immediately thought "headless horseman" and it was the first one in this article. :D

These creatures of the night look decidedly more canine than bat-like, but wh...

Looking for a canine Jack O'Lantern suit for this night of ghoulish madness? ... 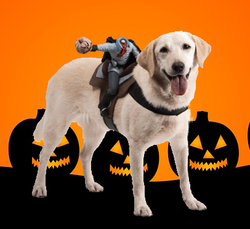 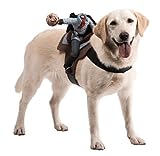 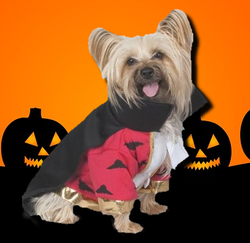 These creatures of the night look decidedly more canine than bat-like, but why should humans have all the fun? Your dog can have a vampire costume too!
84%  6   10 JoHarrington
Halloween Costumes for Pets 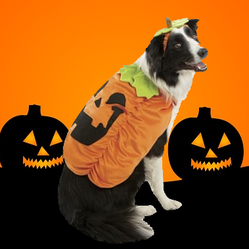 Looking for a canine Jack O'Lantern suit for this night of ghoulish madness? These are the gourd-liest Halloween dog outfits around!
Loading ...
Error!