Who Is Captain America?

Captain America is a Success from the Start

Captain America (Steve Rogers) was first introduced to Americans in December, 1940 with the release of Captain America Comics #1 (cover-date March 1911) by Marvel's predecessor, Timely Comics.  The issue proved to be a success, and Captain America would forever be part of American pop culture.

An interesting aspect to Captain America's history is that the comic books featured some kind of relation to the current politics and important notes in America history at -or around- the time of a comic book's release.  For example, one of the earliest issues -and most famous- has Captain America punching Adolf Hitler in the jaw.   Later, Captain America would be featured in the comic's own version of the Watergate scandal.

It's easy to see that Joe Simon and Jack Kirby had some political and propaganda messages woven into Captain America's comic books.   This, of course, raised objections to the comic book.  And, despite those objections, Captain America would go on to be one of the most successful and popular superheroes of all-time.

Besides having one of the most recognizable faces for a villain, Red Skull is one of the oldest and most infamous supervillains of all-time (in both Marvel and DC).  The first incarnation of The Red Skull began in the same comic that we first meet Captain America: Captain America Comics #1.  However, this version of Red Skull (George Maxon) isn't the true Red Skull; but, rather, he is an agent of the true Red Skull (Johann Schmidt).   Another Red Skull, this time being impersonated by a Russian KGB agent named Albert Malik, would go on to battle a Captain America; who's being impersonated by the Grand Director (William Burnside) at this time during the 1950s.

Throughout all of Red Skull's incarnations, he was always a tough foe for Captain America.  Not because he possessed superhero strength or abilities -which had none of- but because of Red Skull's abilities in subversion and political operations.   Red Skull, no matter the incarnation, always had a genius that compared to some of Marvel's most twisted, intellectual minds (like Doctor Doom).

The Red Skull's importance to the Marvel universe can be seen in many areas and his appearance in the history of other comic book superheroes.  For example, Peter Parker's (Spiderman) parents were killed by Red Skull; making Peter Parker an orphan, and leading him to be raised by his aunt and uncle.

A retelling of Captain America's origins 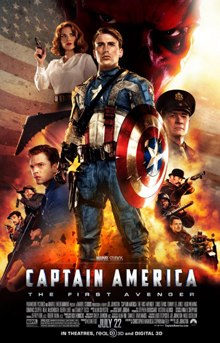 Captain America: The First Avenger is the latest, but not the first, movie to feature Marvel's iconic American superhero.  The first movie, debuting in 1944, is a Republic serial film.  The movie is black-and-white, and could only be described as being 'loosely' based upon Captain America.

However, the latest film to feature Captain America is considerably closer to Marvel canon.  Many lesser known characters in his history, like Dr. Arnin Zola, Heinz Kruger, and Dr. Abraham Erskine, make an appearance. Even Bucky appears in the movie.

The origin story is fairly close to the original, with the use of the serum(Super-Soldier Serum), and experiments, to create a super soldier.  However, George Maxon -the original Red Skull- is absent.  Instead, we're introduced to Johann Schmidt, the true Red Skull.

Captain America And the Avengers

One of the greatest superhero teams of all-time

When people think of the Avengers, they think of Captain America as being one of the core and most recognized members.  However, he wasn't one of the founders (Iron Man, Thor, Ant-man, The Wasp, and Hulk).  He, however, would be one of the first recruits in the 1960s.

His importance to the recognition and success of the Avengers is shown in the decision to have the upcoming Avengers movie be "seen" through the eyes of Steve Rogers.

For more on the Avengers, check back here soon for the upcoming, "Who Are The Avengers?" page.

Who Are The Avengers?
A look at the Avengers; from a brief glimpse of their start to the upcoming movie.

Who Is Iron Man?
A look at Iron Man, one of Marvel's more popular superheroes, and a founding member of the Avengers.