A look at the Asgardian god Thor, as depicted in the Marvel Universe comic books.

From Norse mythology to comic books

The Mighty Thor -created by the legendary comic book creators Stan Lee, Jack Kirby, and Larry Lieber- has been a stable among Marvel's greatest superheroes for nearly 50 years.  His first appearance in Journey Into Mystery #83 (August 1962) saw him placed in the body of a disabled human named Donald Blake by his father Odin. Later, he finds Mjolnir -his hammer- which he uses to fight off an alien invasion.

Marvel's Thor, unlike many superheroes, is strongly based upon the mythical god Thor from Norse Mythology.  Other gods and characters, like Odin and Loki, along with mythical places and things are included in Marvel's Thor canon.

The Asgardian god also routinely fights some of Marvel's strongest supervillains and cosmic beings.  From The Absorbing Man to his adopted brother Loki, Thor has gone toe-to-toe with foes of immense power, super intelligence, or a combination of both.

Thor is also widely considered to be one of Marvel's most powerful superheroes; a definite top-tier, along side the likes of Silver Surfer and the Sorcerer Supreme.  Perhaps, only beaten by a raging Hulk in the World War Hulk series. 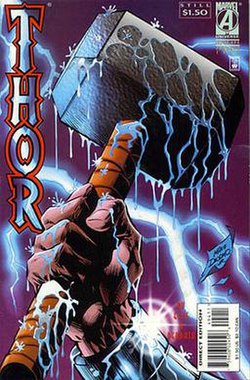 When it comes to recognizing Thor, separating him from his hammer is like separating Silver Surfer from his board.  The God Of Thunder, however, is still highly powerful with or without his hammer.

The hammer, like many other Marvel characters from Thor canon, is based upon Mjöllnir, a weapon from Norse Mythology.   Marvel's version of Mjolnir is created by dwarven blacksmiths from an Asgardian metal called uru.  Later, Odin passes it down to his son Thor, who must then prove himself worthy of wielding the hammer.

The inscription, "Whosoever holds this hammer, if he be worthy, shall possess the power of Thor," is inscribed on the side of the hammer.  Only a select few in official Marvel canon have been able to wield Mjolnir, one of which was fellow Avenger Captain America.

For more, head over to Wikipedia's article on Mjolnir.

Thor (2011) is based upon Marvel's Asgardian god of thunder.

The Mighty Thor (Chris Hemsworth), God of Thunder, is cast out of Asgard by his father Odin (Anthony Hopkins) after a combination of arrogance and a bit of trickery by his adopted brother Loki (Tom Hiddleston).  Exiled to Earth, Thor must redeem himself and reclaim Mjolnir, his hammer.

The film initially released in the Philippines (May 2011), then hit other theaters worldwide (August 2011).  The success of the film has prompted Marvel Studios, a division of Disney, to create a sequel that sees Chris Hemsworth once again retaining the role of the God of Thunder. 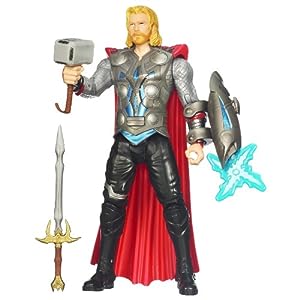 There are a ton of Thor toys available. These range from replicas of Thor's hammer (Mjolnir) to action figures.  Other Thor related action figures include Loki, Thor Destroyer, and even Odin.

However, it's important to remember that there will be a number of different non-Marvel related Thor brands, which are not related to Marvel's superhero.  Make sure that when you're shopping for the superhero Thor that it's Marvel's Thor brand.

The Thor party supplies feature images of Thor that are reminiscent of the comic books more so than the movies.  In addition to the party packs (plates, napkins, cups, balloons, etc) are the party favors, decorations, and party games.

There is even an awesome Thor decoration kit; which would be the centerpiece of any Thor themed party.

Who Are The Avengers?
A look at the Avengers; from a brief glimpse of their start to the upcoming movie.

Who Is Iron Man?
A look at Iron Man, one of Marvel's more popular superheroes, and a founding member of the Avengers.
Updated: 02/15/2012, AlanB
Thank you! Would you like to post a comment now?
1

A look at Iron Man, one of Marvel's more popular superheroes, and a founding ...

A look at Iron Man, one of Marvel's more popular superheroes, and a founding member of the Avengers.
Loading ...
Error!