A look at Iron Man, one of Marvel's more popular superheroes, and a founding member of the Avengers.

Tony Stark, and his powered suit, has one of the best origin stories of all time

Iron Man's iconic beginning starts in Tales of Suspense #39. Like most legendary superheroes, both Stan Lee and Jack Kirby had a hand in Iron Man's creation.  Larry Lieber (scripter) and Don Heck (story-artist) also contributed to the creation of the man in the invincible suit of metal.

Anthony Edward "Tony" Stark, Iron Man's alter ego, is highly intelligent, with extensive skills as an industrialist and engineer.  He's also a billionaire; a fortune he inherited from his father, Howard Stark, who was the head of Stark Industries.  When his parents died in a car crash, Tony Stark took over Stark Industries.

During a trip to observe the effects of his experimental weapons on American efforts, Tony Stark is injured by a booby trap.  Wong-Chu -later revealed to be Mandarin's Pawn- captures Tony Stark; ordering him to design weapons.   While Tony Stark is imprisoned, Ho Yinsen, a Nobel-Prize-winning physicist, creates a magnetic plate to save Tony Stark's life from the shrapnel that threatens to pierce his heart.

Tony Stark and Ho Yinsen work together to create a means to escape their captivity: a powered suit made of metal.  The suit, which renders the wearer nearly invincible, helps Tony Stark escape.  Unfortunately, Ho Yinsen dies while sacrificing his life to save Tony Stark's.  This prompts Tony Stark -now wearing the powered suit- to take revenge on the kidnappers.

Ironically, Tony Stark's means of escape will always be his prison.  Without the powered suit's chestplate, Tony Stark would quickly die. Plus, he needs to replenish the suits energy daily so that it can regulate his heart.

Check out Wikipedia's Iron Man's Armor page for further information and additional suits that Tony Stark has worn over the years as Iron Man.

A look at two successful movies based upon Marvel's invincible man

Iron Man (2008) is a movie based upon the character's origins.

For the most part, the movie follows the original comic-book.  However, in this version, he is captured -injured by shrapnel in attack- by an Afghan terrorist group called Ten Rings, led by Raza (Faran Tahir).  Dr. Yinsen creates a temporary electromagnetic plate to prevent shrapnel from piercing Tony Stark's heart.  After Tony Stark regains consciousness, he creates an arc reactor to replace the electromagnetic plates power source.

Both James Rhodes (Jeff Bridges) and Pepper Potts (Gwyneth Paltrow), significant characters in Tony Stark's personal life from the comic-books, make appearances.   Additionally, we see S.H.I.E.L.D director Nick Fury (Samuel L. Jackson) make an appearance in a post-credit scene where he mentions the "Avengers Initiative."  Which, of course, is the start towards the buildup -in several movies- to The Avengers (2012), due to release on March 4th, 2012.

The second movie in the Iron Man series continues the story of the first; this time, focusing heavily on Tony Stark's, again played by Robert Downey Jr., battles with the U.S. government over control of the Iron Man suit.

The main antagonist to Iron Man, however, is Ivan Vanko (Mickey Rourke) who is also known as Whiplash from the comic books.  Ivan, out for revenge against Tony Stark, is another engineering genius who uses the arc technology to power his own suit.

James Rhodes (Don Cheadle) returns in the movie, but this 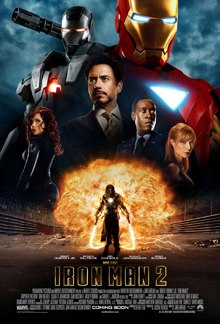 time acquires one of Tony Stark's suits.  With the help of the U.S. Military, he makes modifications to the suit and becomes another one of Marvel's superheroes called War Machine.  Pepper Potts, again played by Gwyneth Paltrow, also returns.

We're introduced to Natalie Rushman (Scarlett Johansson) hired as an assistant to Tony Stark - who is later revealed to be Natasha Romanoff/Black Widow- along with a return of Nick Fury (Samuel L. Jackson).  Obviously, both characters are showcased to build up to the Avengers movie.

Again, there is another post-credits scenes, but this time we're treated to a teaser involving Thor.  Agent Coulson (Clark Gregg) discovers a large hammer at the bottom of a crater in the New Mexico desert.

Not only are the Iron Man action figures great fun for kids, but they make for some pretty cool collectables.  Some action figures, especially the newer ones, are not as collectable as older ones; but the artwork and detail in them make them great decorations for your personal home or office spaces.

Action figures on Amazon and other places can range from as little as a few dollars to hundreds for collectable/rare toys.  However, if you are purchasing one of the more expensive, collectable, rare pieces make sure the condition is good.  Also, make sure the seller -if you cannot see the item in person- has an excellent reputation.

Basically, do your research before purchasing a toy as a collector or decoration piece.

The Iron Man party supplies are a great choice for adding more to someone's birthday party that is a fan of Iron Man.  On top of the party pack (napkins, plates, cups, tablecloth, etc) are the foam flyers, stickers, Iron Man sipper bottles, and other Iron Man themed party supplies and decorations.

Iron Man is also featured prominently in the art on the recently released (February 2012) Avengers party supplies, favors, and decorations.

Who Are The Avengers?
A look at the Avengers; from a brief glimpse of their start to the upcoming movie.
Updated: 02/16/2012, AlanB
Thank you! Would you like to post a comment now?
2

Thanks, Terri. I worked hard on it.

One of the things I like most about Iron Man is that he is essentially a normal human being -albeit with high intelligence- that uses a powered suit to become a superhero. I'm not sure if people think about this that much, but he is very much Marvel's version of Batman.

I enjoyed that. I haven't read the original Iron Man comics. I'm hoping my boys get into comics and graphic novels when they're older.