Breville juicer reviews that have been left by other consumers on shopping sites such as Amazon.com are generally rave reviews. Breville juicers do have some flaws, however those are common to all centrifugal juicers. For instance, centrifugal juicers tend to be louder than masticating juicers or twin gear juicers. They also produce juice more quickly, which means that the juice will oxidize if you don't drink it soon.

Breville juicer reviews also praise some particular traits of these juicers. For instance the juice made by these juicers is quite low in pulp. Many people who like low-pulp juices find that they have to strain the juice produced by other juicers, but they don't have to do so with Breville juicers.

Comparing The Most Popular Breville Juicers 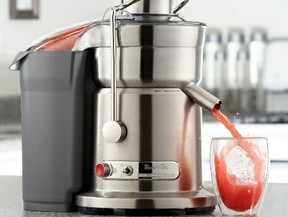 The Breville 800jexl has two speeds, but the Breville BJE510XL features 5 speeds and an LCD screen, giving it quite a futuristic look and feel. The juicer has a safety lock which means you can't have a messy accident - quite a useful feature if you're normally a messy person! It also has a detachable spout so that you can pour juice directly into a cup and start drinking straight away. The juicer also comes with a brush that is designed to help you clean the juicer quickly. Cleaning speed is very important to me and I love the fact that the 510xl cleans up quickly. Always remember to clean your juicer immediately after using, so that you don't allow juice to dry on the parts.

Breville really knows what they're doing. They have been around for a really long time and built up their brand and reputation and they understand that they need good products to back up that reputation. One of the juicers they made, the JE900 received some poor feedback: it was made using plastic parts which wore out quickly. Breville took all the feedback into account and started making juicers with stainless steel parts instead. Their blades on the most popular models are titanium plated. Yes, they have taken everything into account and know their juicers receive rave reviews!

The Breville company was started in 1932 in Australia. They've definitely been around for a long time and by the looks of things, they will still be making juicers by the time our great-grandkids start juicing.

Breville are well known for inventing the original sandwich toaster. Breville juicers are as reputed as their other products, and their customer service is top notch. Of course, if you are considering juicers that are not made by Breville, then you'll find that popular choices include the Omega VRT350HD, the Omega J8006 and the Super Angel 5500 juicers. 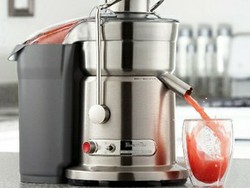