Looking for female fancy dress for the fuller figure this Halloween? There's a plethora of spooky, scary and downright glamorous outfits to choose!

Sick and tired of skipping through Halloween costumes designed for stick insects? Then you've come to the right place.

These larger figure outfits glorify the curvy female form! They will certainly leave you looking the part, as you trick or treat and party on out during those Halloween events. And let's face it, most of these will look better on you, than on the skinny runts all around.

Come on, let's go shopping for those spooky October glamfests!

Halloween Costumes for a Full Figure

The emphasis here is on Halloween scary.  We've gone for the monsters, spooks and creepy women of legend. This is after all the night when the horror-filled denizens of the Otherworld emerge from the shadows to run wild upon our world.

Let us start with a stereotype.  When we think of extra large fancy dress for women, our minds naturally turn to the goddesses.

You can pretty much fill a pantheon with plus sized goddess outfits. But this is Halloween and there can be only one contender.  Enter the Gorgons!

Plus Size Medusa Costume for Halloween

Have you got a few people who you'd like to turn into stone? Get your glare on, girl! The Gorgons are coming to town. 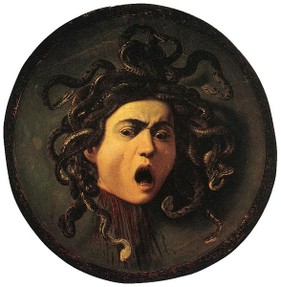 A stare from Medusa could turn whole battalions into stone. Her wild hair writhed, each lock made up of living, venomous vipers. Her monstrous visage was terrible to behold! (You'll have to do that bit with make-up...)

According to Greek legend, Medusa was the eldest of three sisters, collectively named The Gorgons. She was a stunningly beautiful seductress, but was caught by Athena having sex in Her temple. (Some say Medusa was forced into it by Poseidon, which makes this story darker still.)

Athena turned the sexy Medusa into a monster. With serpent hair and a glare so hideous, it turned men to stone, Medusa guarded the entrance to her cave. At least she did until Perseus beheaded her, and thereon used her head as a weapon.

This velvet Halloween Medusa outfit fits up to US dress size 20-22 (210lbs). It includes the headdress, cape and armbands. You will need to purchase a Medusa wig separately, if you want the full effect.

Maybe when you think of divine nasties, it's not the Greeks you contemplate, but old Nick Himself. Unleash the devil woman!

You can look Hellishly good this Halloween with one of these cheeky numbers. Up above is the Devil's Temptress.  This glamorously fitted red dress will fit up to bust size 47.5", waist 40" and hips 50", with smaller sizes available too.

The demonic costume for plus size women includes the gown, a lace petticoat for shape, the choker and the vinyl devil's horns. It's a complete outfit for Halloween. But there are other options too.

Angel or devil?  You decide!  The first of these alternative costumes embraces both!  The Angel Devil Plus Size costume comes complete with both a devil's horn AND a halo, as well as a spiky tail at the back.

It comes in US dress sizes 16-24.  However, you will have to match your own shoes. The red and white footwear isn't part of the ensemble.

Slightly smaller is the Hot Devil costume by Paper Magic. This arrives in sizes 16-18.  You get the polyester red dress, corset, sleeves and horns. You add the sassy attitude yourself.

Hubble, bubble, toil and trouble! If it's a traditional Halloween outfit you're looking to buy, then there's really only one choice.

The holiday just wouldn't be the same without a witch (or thirteen) cackling through the streets. It is the most popular Halloween costume of all!

Needless to say, there are plenty of plus size witch outfits to browse. They range from the traditional wicked witch of lore through to the sexy glamor of the sorceress.

Our first three options, from left to right, are:

Can't pick?  Let me make your decision even more difficult with another three Halloween witch costumes for the larger lady.

The Hooded Robe, at number two there, is sometimes listed as a Vampira costume. It could well be that too. But if you want to go all out for vampires, with no room for ambiguity, then check out what's coming up!

Forget the trick and treat candy boxes, these ladies are going straight for the jugular!

I'm not convinced that any of the models on this page have the figure to pull off plus size costumes, but the lady above really isn't doing justice to a gorgeous frock.

She would need to be able to fill out a US dress size from 16-22, to properly show off the Goth Female Vampire outfit in all its glory. Reckon you've got what it takes?

Everybody knows that female vampires are sexy.  Just look at Pam from True Blood. These Halloween outfits are the number one choice for those who are looking for a touch of glamor.

I can see the likes of Pam rocking either of the gowns above, on a night out in Fangtasia.

First up is the Elegant Female Vampire costume (the name could do with some work). It segues from burgundy to black, and includes the stylish choker with attached vampire collar. However, it's also the smallest of the range. Though deemed 'plus size', it only goes to US sizes 14-16.

The green polyester Queen of the Vampires plus size costume is much better. I love the bat motifs!  You get the dress, overskirt and the stand up collar - de rigueur for any discerning bloodsucker - as well as a funky bat hair-clip.

Gothic Jewelry for Vampires
Cosplaying a vampire at a party? Or do you desire vampire chic to complete your look? Glamorous jewelry to get your teeth into!

Why Do We Fear Vampires?
The legends go back even further than you may think. They are one of the most enduring monsters in our world. So what makes us so afraid of vampires?

Once this nurse would have helped fix your brain injury, now she's causing them, one bite at a time!

However, if you do fancy lumbering about as a brain-nomming, undead, zombie nurse, then this Halloween outfit comes in sizes up to 24W.  That's 52" bust, 45" waist and 54" hips. Enjoy!

Of course, as every horror movie theater goer can tell you, the worst monsters aren't necessarily the undead.

Slasher movies have brought us some enduring nasty human figures, whom none of us wish to meet on a dark, Halloween night.  Your friends might not get the choice, as you recreate Nightmare on Elm Street or Friday the 13th right on their trick and treating doorsteps.

Miss Krueger is a novel take on Freddy Krueger himself. You get the striped red and black hockey dress - which recalls his sweater, as well as the brown, fedora hat and glove with 7" finger blades. You will have to add your own stockings and boots.

Miss Voorhees is a similar ensemble, recalling the terrifying Jason. What you can't see from the picture is that the hockey dress has 'Voorhees 13' emblazoned on the back.  His infamous mask is here turned into a handbag.  You don't, however, get the machete, stockings or boots. Those you'll need to accessorize yourself.

Both are available in US dress sizes up to 22.

Time to relive those classic moments with a compilation. If only so you can gain some Halloween make up inspiration.

The Best Classic Horror Halloween Masks on Amazon
So many masks to choose from, but which is the absolute number one mask for Halloween in each horror genre? I've taken to the stores to find out.

Sasquatch Decorations for Home and Garden
As Halloween beckons, house-holders add yet another piece to the yearly collection. Ghosts, ghouls, vampires and monsters. What is missing here? Ah! Yes! Bigfoot!

Titanic Ghost Costumes for Halloween
Anyone can go trick or treating as a ghost. With a little imagination, you can turn your outfit into an instantly recognizable revenant of the 20th century's most iconic disaster.
Updated: 07/19/2014, JoHarrington
Thank you! Would you like to post a comment now?
10

The glove on the costume above is made from a 'metal-like' material. It's not actually dangerous. Unlike your dad's friend's glove! Wow! That's quite a story!

We,, the news article said that he used the glove to slash his sleeping friend... He got a lifetime sentence for it - though I'm sure none of these costumes will cause something like that to happen!

We,, the news article said that he used the glove to slash his sleeping friend... He got a lifetime sentence for it - though I'm sure none of these costumes will cause something like that to happen!

Oh no! What happened? My imagination is running into overtime here!

The Kreuger costume reminds me of a friend my dad used to have who ended up getting sent to prison for making a real set of those claws for Halloween...

Just because you have a baby on the way, why shouldn't you join in the fun? ... 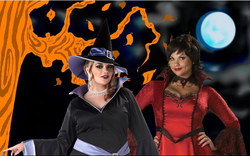 So many masks to choose from, but which is the absolute number one mask for Halloween in each horror genre? I've taken to the stores to find out.
73%  4   9 JoHarrington
Halloween Costumes for Adults 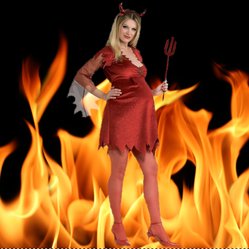 Just because you have a baby on the way, why shouldn't you join in the fun? There are plenty of maternity outfits for Halloween from which to choose!
Loading ...
Error!