We like the Fisher-Price Imaginext range of toys so we're pleased to see a new Green Lantern range for 2011.

Imaginext is well built and the toys have lots of features that little kids are able to operate, but the themes and characters are interesting enough that kids will get a few years play from them.

My three year old nephew loves his Imaginext collection, they are his favorite toys. My boys have some Imaginext too, but not as much as their cousin! 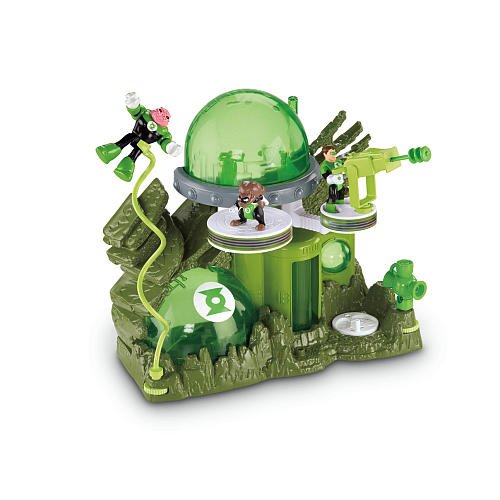 The set includes a Moon Base which as usual with Imaginext has lots to do. You can place a figure on a disk and turn it to open a door. There's a projectile launcher to fire at enemies.

The space tether is a neat touch, you can attach a figure and then turn the thumbwheel to let them explore!

There's a light-up lantern with a push button. The set takes 3 button cell batteries which are included.

You get 3 action figures: Green Lantern himself (Hal Jordan), Kilowog and B’DG the space squirrel.

You also get a DC Super Friends DVD which is a pretty cool extra.

The set is aimed at kids aged 3-8, mostly boys, but there are some girls who will enjoy it too.

The Fisher-Price Imaginext DC Super Friends Green Lantern Jet is the Green Lantern's vehicle for when he needs to leave the moon base.

The Cockpit of the jet opens up so you can pop the included Green Lantern action figure inside.

If Green Lantern runs into any trouble on his trip he can launch arrows and save the day.

This range also includes lots of Batman sets including many Batman enemies, and you'll also find Superman there too.

The figures are compatible so kids can build a collection and act of scenes from the DC Super Friends cartoon.

It's easy to keep Green Lantern fans happy this Christmas!

My boys always love to reenact their favorite TV show episodes with their action toys.

If you missed the episodes then they are available from Amazon Instant Video (left.)

Green Lantern Pajamas for Kids
I love to see my boys dressed up in cool pajamas! Green Lantern is a popular super hero at the moment so let's look at some Green Latern pajamas for kids.

Best Gifts for a 4 Year Old Boy
A collection of the best gifts for a four year old boy. Lots of ideas for older preschoolers.