Sensei Wu is a very important character in the Ninjago universe. He is trying to prevent his evil brother Lord Garmadon ruling Ninjago with darkness.

Sensei Wu searches for four young men who can become Spinjitzu masters - one for each element (fire, earth, lightning and ice.)

He finds Kai, Cole, Jay and Zane and trains them (with some effort) in Spinjitzu.

Sensei Wu mentors the four Ninjas in a fight to rescue Kai's sister Nya and save Ninjago from the evil Lord Garmadon and his skeleton army.

In Ninjago Graphic Novels #1: The Challenge of Samukai you can Learn more about Sensei Wu and how he trains the four young men to be Spinjitzu warriors.

There are two versions of Sensei Wu with a Spinjitzu spinner. 2255 has Sensei Wu dressed in black. There's also a limited edition set with Sensei Wu in white that includes some cool extras: 2 exclusive cards (Gold Battle Card and 3D Character Card), and 9 advanced weapons including a glow in the dark weapon and force field bricks!

In the Ninjago Dojo set you also get a Sensei Wu mini figure and a white spinner.

Sensei Wu is in the Ninjago Dojo Set

You can find a Sensei Wu mini figure in the Ninjago Dojo set. This is very appropriate as this is where Sensei Wu trains the Ninjas to be Spinjitzu masters.

The set also features his student Zane and Skeleton Army warrior Nuckal. The set includes a white Spinjitzu spinner too.

Other Lego Ninjago Sets that Include Sensei Wu

Sensei Wu also appears in the Ninjago Fire Temple set - this is one of the biggest sets in the range. It also includes Kai and his Fire Dragon.

Sensei Wu is also in the Ninjago Lightning Dragon set needing to be rescued!

You'll also find Sensei Wu in the 3D Battle Arena which is a complete starter set for the Spinjitzu battle game.

Ninjago Jay
Ninjago Jay is the Ninja of Lighting in the Ninjago universe. Learn all about Jay and find cool gifts for Jay fans.
Updated: 09/12/2011, TerriRexson
Thank you! Would you like to post a comment now?
0

Did you learn something about Sensei Wu? 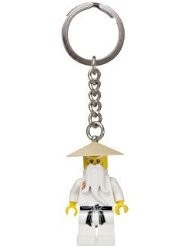 It's hard to believe, but in all their 80 year history, LEGO has never put out sets that were directed exclusively at girls. LEGO Friends finally rectify this injustice.
100%  9   12 vikksimmons
Lego