Ninjago Kai is the Ninja of Fire and has a firey temperature to match!

Kai is very popular because he's the main hero in the Lego Ninjago story. He doesn't follow instructions well but his heart is in the right place, he wants to rescue his sister Nya from Lord Garmadon and the Skeleton Army.

Kai wears bright red. This seals his fate as my older son's favorite Lego Ninja - red is his favorite color.

The Kai: Ninja of Fire Chapter Book tells the story of Kai and his training to be a Ninja warrior and master of Spinjitzu.

The book has a reading age of 9-12. Younger children will enjoy hearing about Kai as a bedtime story. This book makes a great stocking stuffer for Ninjago Kai fans.

For Halloween and Role Play / Cosplay

Ninjago Kai Costume
Find a dress up of Halloween costume for Ninjago Kai with Ninja accessories.

The latest version of Kai and his spinner as of Summer 2012 is the NRG Kai version.

NRG Kai appears in the Ninjago Weapons pack along with Chokun. Both characters come with spinners, crowns, accessories and weapons.

This is an excellent version of Kai. He has a fire design and this even covers his head which is red! His hands are also red.

Which Ninjago Sets include a Kai Mini Figure?

Lego Ninjago Snakes Sets that include a Kai Minifigure

The Lego Ninjago Fire Temple set came out in August 2011. It's really Kai's set. Kai is the Ninja of Fire and this set is the Fire Temple. It's the biggest set in the collection.

The set includes Kai in his DX version - with dragon detail. It also includes Kai's dragon, the Fire Dragon.

At first the dragons attack Kai and his friends, but once the dragons realize that the Ninjas are trying to protect the gold weapons they begin to help them.

Kai then rides the Fire Dragon. This is a great set for Kai fans. It's now an older set but very good. We have it. Here's my Ninjago Fire Temple review with pictures.

Other sets with Kai

The Blacksmith Shop set also includes a Kai mini figure (in original costume.) Kai is the son of a blacksmith and was running the blacksmith shop '4 weapons' when things started to get interesting in Ninjago. This is a good set for role playing the story of Kai and how he got on the path to becoming a Spinjitzu warrior.

You can also find Kai training at the Ninja Ambush (that's a neat little set.)

Where better to store your Kai Lego?

We like this very cool Lego Ninjago Kai project case. I do love Lego, but I don't like treading on it! Lego storage that encourages the kids to put their Lego away is very welcome.

It makes Lego portable too. I think I'll get my older son one of these for Christmas to keep his Lego Ninjago bits separate from all the other Lego we've got.

I hope you enjoyed getting to know Kai, the Fire Ninja a bit better.

Ninjago Jay
Ninjago Jay is the Ninja of Lighting in the Ninjago universe. Learn all about Jay and find cool gifts for Jay fans.

Lego Ninjago Explained
Lego Ninjago is a very popular new Lego range. Here's a guide to the Ninjago universe for parents and gift-givers.
Updated: 05/20/2012, TerriRexson
Thank you! Would you like to post a comment now?
4

Did you learn something about Ninjago Kai? 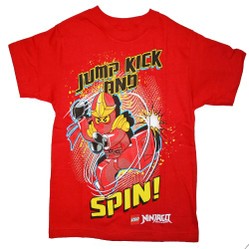