Ninjago Jay is the Ninja of Lighting in the Ninjago universe. Learn all about Jay and find cool gifts for Jay fans.

Ninjago Jay is a very popular character in the Ninjago universe. He's the Ninja of Lightning and wears blue. (Blue Jay - get it?) Jay is one of the four Ninjas, one for each element, in a team put together by Spinjitzu master Sensei Wu.

Jay is a fun character who cracks lots of jokes and has some interesting hobbies when he gets some free time from training to be a Spinjitzu warrior.

The book has a reading level of 9-12. I'm sure lots of younger fans of Jay would enjoy having the story read to them and it's a good way to encourage them to improve their reading!

The chapter book makes a good stocking stuffer gift for a fan of Jay.

Here he is on these Ninjago Jay T-shirts:

Ninjago Jay Costume
Find a Ninjago Jay costume with weapons and accessories for Halloween or dressing up for role play or cosplay.

The NRG spinners are the new range for Summer and Fall 2012. NRG Jay is one of the first of these new minifigures to be available.

NRG Jay has a very cool lightning print on his body and his head - and the head is blue!

The NRG Spinner is translucent blue and also has an NRG lightning design.

With Jay and Spinner

Jay puts his training to use

In this special edition set you get a Jay DX (dragon robes) mini figure and lots of other cool stuff.

This is an important set for Jay fans because it features his dragon. It's also one of the more expensive sets because it has a lot of pieces and a large dragon.

Jay appears in several of the Ninjago Snakes sets. He's in the Jay's Storm Fighter set which has his vehicle.

And Jay appears along with the other original four ninjas in the Ninjago Ultra Sonic Raider set - the ninja flying vehicle.

Jay fans will love this Ninja of Lightning backpack for school or days out.

It shows Jay is full Ninja mode with a spear.

The LEGO Ninjago Jay watch makes a great gift for Jay fans. The watch comes in Jay's colors and  the links can be rearranged.

You also get a Jay minifigure which can be attached to the watch or taken off for play.

Lego Ninjago Explained
Lego Ninjago is a very popular new Lego range. Here's a guide to the Ninjago universe for parents and gift-givers.
Updated: 05/20/2012, TerriRexson
Thank you! Would you like to post a comment now?
1

Thanks for visiting Ninjago Jay 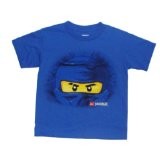