Setting up Rich Pins to Promote your Wizzley Articles on Pinterest

Authorizing Wizzley for Rich Pins on Pinterest is as uncomplicated as it gets. It only takes seconds to do. What are you waiting for?!

I'll admit that when I first heard about Rich Pins, I put it aside 'til later. The sort of 'later' that - if left to my own devices - never actually comes.

In the ever shifting world of SEO and social networking, this was one more thing to learn. It smacked of being one of those seemingly helpful tools for writers, which ultimately benefit some corporation over us. The sort that require a degree in programming to install; an analyst-cum-lawyer's mind to comprehend its operation; and a philosopher's outlook to ultimately see the point.

Boy, was I wrong!

Put your prejudice aside. This one makes sense, and it took you longer to read these paragraphs, than it will to set Rich Pins up for Wizzley.

Amidst the raft of social networks and curation sites, Pinterest looms large, making it a great place to bring in more Wizzley readers. 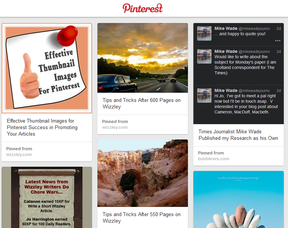 Before you even look at Rich Pins, you'll need to know why Pinterest matters.

After all, you could be here all day maximizing places that purport to boost your internet traffic. It doesn't necessarily mean that they actually do what it says on the packet, and in the meanwhile, there's valuable writing time being lost.

Pinterest is worth joining. It's one of the biggest internet sites around, popular with people of all ages and backgrounds, constituting a treasure trove of exciting things to find.

If you're looking to increase your readership, then your articles appearing on Pinterest should be made a priority. It's one of the biggies, comfortably nestling alongside Reddit, Twitter, StumbleUpon, Facebook and Tumblr - out-pacing even some of them.

In an age of visual delights, Pinterest was a trend-setter. Swopping lists of links with pictures, it looks aesthetically pleasing. People warm much more to fancy images than reams of text. A page can be taken in at a glance; information flooding out in the same way that most of us view our world, as a series of visions waiting to attract our attention, or taken together in categories to form an overall impression.

Hours can be spent on Pinterest. The most compelling picture wins, drawing eyes towards it and distracting minds from the mass of the rest. Potential readers click for more, perhaps then following a link all the way back to Wizzley; pinning the article too in turn, if they found it interesting enough, thus adding to the snowball effect of publicity.

I've had many page ranks made in this way, or suddenly resurrect, when it was pinned to a large community board.

If you're still wondering about the importance of Pinterest, contemplating its influence on the web, look very closely at the front page of Wizzley, then compare and contrast with any given page on Pinterest. Like I said, it set a powerful trend and changed the face of the internet.

Learn More about Pinterest and its Place on the Web

Even if you don't activate Rich Pins (and you're a fool if you don't), then you should be pinning Wizzley articles. Only be careful in sharing too many of your own!

Rich Pins Increase Zazzle Sales
The new RICH PINS offered by Zazzle helps you market products much more successfully. Now you don't need a blog or website to do well.

Pinterest is all about the pictures. Wizzley is largely about the words. The two aren't always a perfect fit, unless you make it so. 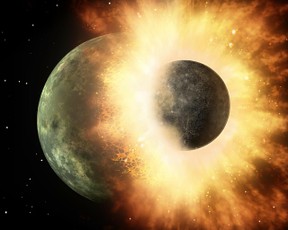 On Pinterest, awe-inspiring images take precedence over its source. An amazing picture may be easily divorced from the webpage that originally supplied it.

That's why the options tab - at the foot of the left-hand column of any Wizzley page in edit mode - includes a tick box empowering authors to prohibit the pinning of their article. It safeguards personal pictures, or those used with permission, from being shared without attribution nor even a link back to the source.

Wizzley has this ticked to allow Pinterest by default. Unless you have very good reasons to turn it off, the benefit in heightened traffic far outweighs the potential for abuse.

Rich Pins represent this issue tackled from the other side of the equation. This is Pinterest itself attempting to regulate repinning on its site, welding together picture and source, so that any Rich Pinned image will always lead back to the place from where it was originally lifted.

This will only work for those people sharing from sites for which they have had Rich Pins approved. But that doesn't greatly matter.

It puts one version out there, which has all the information intact. Moreover that one will feature in the 'already pinned to' section, whenever anyone passes on a matching picture. This is generally a great avenue of discovery for anyone embarking on a browsing quest through Pinterest.

For anyone pinning something that caught their eye, it's a fair assumption that they're interested in the subject matter. Their gaze is much more likely to fall now upon a pin that offers more than merely reproducing the image already seen. Your version, with its source and words attached, will be just that, hence the probability is high that it will become the most popular iteration doing the rounds on Pinterest.

In addition, the Rich Pins embed preview words beneath the picture, contextualizing and/or offering a taster of the article lying behind it.

They will be repinned by individuals with some regard for the topic, who tend to be followed by others who share their enthusiasm, maybe even forming communities devoted to it. These are people predisposed to having their attention drawn by the subject in hand, and now the blarb makes it clear the picture isn't all there is to explore.

It even concludes with a call to action - Read this on wizzley.com.

For all of these reasons - fixed linking, potential to create the popular pin, taster words, added inducement to already interested parties - Rich Pins are likely to boost your Pinterest traffic in ever greater numbers. You'd better get it all set up then!

It's not only Wizzley writers who will benefit from getting their website approved for Rich Pins. This is already driving customers to the source of product pictures.

How to Set Up Pinterest Rich Pins for Wizzley

Fast and unchallenging, with the promise of increased internet traffic (readers!) at the other end. I see no good reason not to do it now!

I consider myself a bit of a geek, and even I get intimidated by the processes involved in establishing some social networking connections. But not this one.

This one is easy. The only way I can imagine it being less hassle would be to get someone to do it on your behalf. Like your three year old, or the elderly gentleman down the road, who's never touched a computer in his life. Easy.

You will find a page looking exactly like this:

You can safely skip the bit about reading the Rich Pin documentation. That's only the technical bit about preparing your website to facilitate them. The Wizzley team already have that covered.

Your Rich Pin Validator page will now look something like this:

Summary Instructions for Rich Pin Set Up on Wizzley

- Amalgamated because the above is so much longer than strictly necessary.

Pinterest will check your application for Rich Pins on Wizzley, then approve (or, I suppose, deny) it.

You will know if you're successful, as an email arrives to tell you. I received mine within the hour, with no problems encountered. By then, everything that I'd ever pinned from the Wizzley web-site had already transformed into Rich Pins. All future ones will automatically be posted like that.

While you're waiting, you do get to enjoy a preview of what your Wizzley Rich Pins will look like, once approval has been granted to produce them.

My Erec and Enide article appears professional and downright snazzy!

How to Use Twitterfeed to Get More Traffic on Wizzley
All Wizzley authors want to attract more readers to their articles. Twitterfeed will help you get the word out on Twitter and a host of other social networks.

Can You Make Money with Chitika on Wizzley?
Wizzley is one of the few on-line writing platforms which allow publishers to monetise with their Chitika advertisements.

Connecting with the Wizzley Community
Wizzley writers are not little islands entire of themselves, we're part of a wider community of authors. Learn how you can help create a buzz around our website.

Tips and Tricks After 600 Pages on Wizzley
I've been a Wizzley author for just over two years. You might say that I've picked up a thing or two along the way. Here are the lessons from my past fifty pages.

Pinterest Settings for the Effective Pinning Experience
Want to make sure you are getting the most out of your Pinterest account? Basic settings are fundamental to the most effective use of this platform.

Effective Thumbnail Images for Pinterest Success in Promoting Your Articles
You want your articles to be liked and, more important, pinned and repinned, and for this to happen, your thumbnail image should be part of your article bookmarking strategy.

This was so simple to do! Thanks for giving such good tips on how to do it!

You're very welcome! And yes, I do recommend setting this lot up.

This is helpful information, Jo, on rich pins. I should do something about it! Now!

Other than that, I have nothing. :(

This is a new one on me, as I expected the prices to show too. I wonder if Zazzle have done something in their code to stop that happening?

I know this is about Wizzley (and have validated rich pins for Wizzley now) but I validated pins for Zazzle when I read Sheri's article. I was expecting Pinterest to show the price when I pick items from Zazzle (directly), but it doesn't. Any thoughts?

Yep! Your PS covered it. Once you've had one page accepted, then it'll automatically do them all.

So I should go and insert the URLs of all my Wizzley pages?
P.S. Oh, sorry, I think I add just one and it will work for all pages, because I see now the domain name Wizzley in your screenshot.

How to Use Twitterfeed to Get More Traffic on Wizzley

All Wizzley authors want to attract more readers to their articles. Twitterfe...

100 Articles on Wizzley: 10 Tips for a Great Wizzley Experience

My journey on Wizzley has been one of discovery. I have put in a lot of time ... 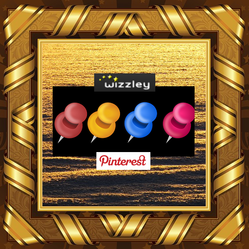 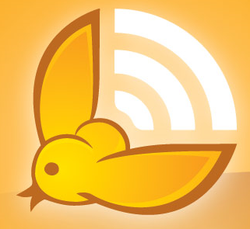 How to Use Twitterfeed to Get More Traffic on Wizzley

All Wizzley authors want to attract more readers to their articles. Twitterfeed will help you get the word out on Twitter and a host of other social networks.
100%  45   24 Mira
How to get more Traffic 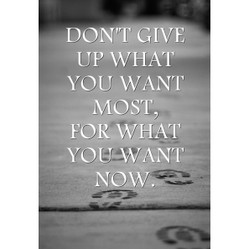 100 Articles on Wizzley: 10 Tips for a Great Wizzley Experience

My journey on Wizzley has been one of discovery. I have put in a lot of time over the past year and a half, and have learned much. Here are my main tips for more traffic and sales.
Loading ...
Error!