Throw pillows are a decorative item that not only add to your decor scheme but also give comfort and warmth. They give a sense of home.

Seashells are a lovely theme that go well with a throw pillow mood. They're beautiful and popular reminders of our natural world. They give a feeling of delicacy and complexity through their color and shape. This means they not only add a natural touch to your home but they also add interest.

High quality throw pillows with a seashell theme can be hard to find though. So I've collected seashells in the form of throw pillows for this article. I've picked pillows in different styles so hopefully there'll be something that matches your decor plans.

Your first choice in seashell throw pillows is to get some that focus on the shells themselves. This means that the colors used in these pillows are usually more natural but you can get brightly colored ones too.

This scattering of seashells on a natural wood background creates a natural looking and interesting design. The scattered look adds to the natural feel. This is because the design looks spontaneous rather than planned.

The plain dark wood background lets these seashells be the feature of this pillow too. The visible wood grain effect as well as the differing shapes and colors in the seashells also makes for an interesting design that has depth.

Of interest these seashells were collected by the designer on a local beach. Obviously another seashell lover is behind this creation.

This is a more modern feel pillow by the same designer (you can see some of the same seashells have been used in this design). I thought I'd also include this one because it has such a clean, modern look to it.

A single seashell has been parted from the others to give a little more order to the scattered look. But the way the seashells have been arranged looks like a seashell collector has been admiring their shells. The design doesn't look artificial or contrived.

The other thing I like about this seashell throw pillow is it's digitally enhanced effect. This gives it a nice modern touch.

This pillow is a good choice if you're wanting something in darker hues or a bit more masculine looking.

This seashell throw pillow is created from a photo of a seashell - but it's been digitally edited to create a slight grunge look. The wide brown border adds to this and gives it a strong character that's good for a room with darker furniture (like leather) or wood decor.

This pillow is my pick for a gift for a man who likes seashells. It's also good if you're looking for a natural themed pillow to pop onto leather furniture in a living room.

This pillow is created from a seashell photo taken by the designer. But the photo has been digitally edited for special effect to create something between a painting and a photo. This is a nice idea if you can't decide on whether to go for a photographic or artistic look in a throw pillow.

The choice of this specific type of seashell gives a feeling of depth to the pillow because you can look inside the shell. The painting effect actually enhances this because it nicely brings out the differing shades of color in the photo.

Yes it's a Real Seashell

I had to include this pillow. It's mood is like an abstract design. Actually it almost looks like fractal act. So this style it gives a new dimension to seashell pillows.

So this is a really novel choice for a seashell throw pillow. It's artistic, It's different. The subtle colors also means it can be included with other seashell inspired pillows with natural colors without looking out of place. I like the thought of it mixed up with grunge looking seashell pillows. This would give a nice balance between the bold and subtle, dark and light as well as the close up and distant look. Something that will add depth and interest to your pillows.

If you're not wanting a natural color scheme have a look for throw pillows created in brighter colors whilst keeping the seashell theme.

These throw pillows caught my eye. They come in a range of ocean themes in different colors. So they make an easy way to create a colorful look that you can fine tune to your taste.

The use of pillows from the same style collection also gives a sense of unity and order even with the differing colors. They also let you stay within the same theme - the beach.

Starfish are a related theme you may not have thought about.

Starfish are certainly related to seashells in their theme so they can be a lovely alternative to seashells for something a little different. They're also great to mix and match with seashell pillows.

This throw pillow is the best one I found that focuses on the starfish itself. it uses a real photo rather than a digital image or artwork design. It also has seashells in the design but they're not the main theme of this pillow.

This design is interesting too because it shows the more detailed, underside of the starfish. This is strongly contrasted against the dark brown wood behind it. The use of the dark wood background makes this throw pillow a nice choice for using on leather furniture or in a room with dark wood features.

Seashells at the Beach

This seashell throw pillow is one that mixes brightly colored starfish with shells and sand.

This pillow design may be harder to fit into your decor because it's rather busy looking with heaps of color and shapes. But it will go perfectly in some rooms. It would also work well as a feature pillow among quieter toned ones.

But it's a good choice if you're having trouble deciding whether to go with starfish or shells - or are not sure how to mix and match the two beach themes together.

This pillow has a lovely muted feel which is perfect if you're wanting something stylish that doesn't take over your room.

It's a hand crafted cotton linen pillow with jute and mother of pearl embroidery. This is a very unusual look compared to the usual seashell pillows (or in this case starfish ones). It's also nice because it includes the seashell theme by using mother of pearl. A creative touch for those looking for something a little different. This design would work among other seashell throw pillows or on it's own.

Throw Pillows with a Beach Theme: Shells, Sand and More
A collection of fabulous beach themed throw pillows for your home

Decorative Butterfly Throw Pillows: Flights of Imagination
These three types of butterfly throw pillows add something special to your home.

Sunflower Throw Pillows: Easy Way to Brighten Any Room
These sunflower throw pillows will add brightness to any room.
Updated: 12/29/2013, SusanM
Thank you! Would you like to post a comment now?
2

I love seashells and "beach" stuff in general. It's relaxing just looking at those cushions. 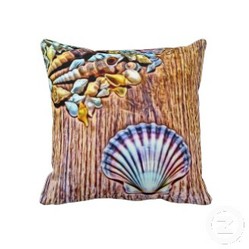 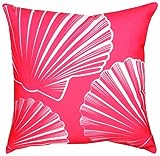 Sea birds are a beautiful element in a nautical or coastal decor, and throw pillows are one of the easiest ways of all to incorporate their natural beauty into your own decor.
50%  4   5 VioletteRose
Pillows and Throws 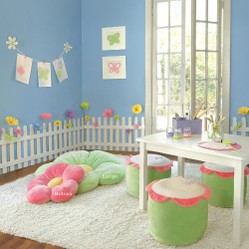