The Seagal Report: The Asian Connection (2016)

A review of an action movie in which Steven Seagal plays a mob boss.

The tagline for this movie is ”The Beast is in the East.” I suppose Steven Seagal is that beast – but I’m not sure.
This is the third Seagal movie released in 2016 – this far. We’re still waiting for ”Killing Salazar” and ”The Perfect Weapon.” And just like in two of the other Seagal movies of 2016, the Tall Guy doesn’t play the lead. In ”The Asian Connection,” directed by Daniel Zirilli, he’s the main bad guy and only appears in a handful of scenes.

According to the copy on the back of the DVD sleeve, ”The Asian Connection” (which shouldn’t be mistaken for the 1995 Hong Kong flick starring Danny Lee) is about a couple that turns into a modern day Bonnie and Clyde. Well, it takes an hour before this happens.

John Edward Lee, who looks like a young Michael Biehn, and Byron Gibson play Jack and Sam, who rob a bank in Southeast Asia. It turns out that the money belongs to evil mob boss Gan Sirankiri (Seagal), who wears a medallion and who likes to perform tai chi in his garden along with a pretty young woman. Sirankiri wants his money back. Some gangster shows up at Jack’s place and forces him and Sam to continue robbing banks. Jack’s girlfriend Avalon (Pim Bubear) has no problems at all with Jack robbing banks. When Sam is killed, she joins Jack on the bank robbing spree, but things go wrong, and Sirankiri and his men are closing in.

I couldn’t care less about Jack, Sam and Avalon, and about the plot of this movie. The young couple is pretty boring – as is this movie. The Thai locations are nice, but the cinematography is rudimentary, the direction is uninspired, and the story is far from captivating. You know something is wrong when you realize you’re checking Facebook on your cell phone while watching. Tom Sizemore, of all people, worked on this movie’s story.

Michael Jai White’s name shows up in the opening titles. Cool, I like him. But it turns out he’s only in one short scene, and that character could’ve been played by anybody. It’s not an action scene.

And Steven Seagal? Well, he appears in more scenes than in ”Sniper: Special Ops” and ”Code of Honor.” There’s one of Seagal’s trademark knife fights at the beginning, and a scene in which he beats up two kickboxers is pretty funny – Seagal walks slowly and penguin-like into the cage and kicks the guys.

I don’t mind if Seagal is having a minor part, if he’s teamed up with somebody like Byron Mann, which was the case in ”A Dangerous Man” and ”Absolution.” The Seagal-Mann movies deliver the goods. ”The Asian Connection” doesn’t deliver at all.

A couple of Seagal’s upcoming movies are directed by Keoni Waxman, which means they ought to be pretty good – or at least above average. 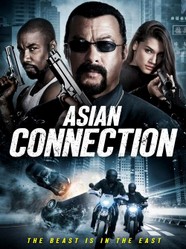