An unholy cackling fills the night, as the Crone bends over her cauldron. Scare small children and have fun with one of these most Pagan of Halloween costumes.

Out on the blasted heath, the flames are whipped into a frenzy by the encroaching storm.

"Mwhahahahaha!" The old hag screeches, as her tapering fingers drop more orbs of green into her over-flowing pot. Ooops! Too many apples in the water there! Best take one out, else no-one will be bobbing for anything.

Sorry! You were expecting all of that eye of newt malarkey; but that's not what you thought it was going to be anyway. And if you don't like my tableau, grab your own witch costume and create something more suitable!

The Wizard of Oz: Wicked Witch of the West Costume

She is probably THE most famous of all the wicked witches. From the pages of L. Frank Baum's classic book, Elphaba (or Bastinda) was memorably played by Margaret Hamilton; and now she has her own musical!

Moreover, the Wicked Witch of the West was the woman who left witches forever associated with green skin!  It was meant to be a theatrical thing.  Any baddie of a supernatural bent was shown on stage with a blue, grey or green visage.  As the movie was reveling in its glorious Technicolor, the convention got carried over.

It doesn't matter which witch outfit you choose this Halloween.  If you paint your skin green, you've gone as Elphaba.

The officially licensed costume above comes in four parts.  The exquisitely tailored gown and hidden petticoat; the tall, pointed hat with a detachable, sweeping sash; and stick-on witch fingernails.

Unfortunately, you'll have to add the green make-up yourself!

Complete your Wicked Witch of the West costume with these goodies.

Wicked Witch of the West Costume from Rubies

It's usually Rubies Costume Company which gets the license for these movie replicas, but this time they lost out.

Nevertheless, they produced a version of their own.  It's not faithful to that shown in The Wizard of Oz, but it's still a credible Wicked Witch.

As always it is great quality and not a bad price.  You will receive the dress and cape, which both fasten with velcro. The gown fits up to US size 12.

Also included is the pointed hat.  The broomstick is not part of this package.

As with all of the outfits on this page, you have to reproduce the make-up yourself.

Traditional Plus Size Halloween Costumes for Women
Looking for female fancy dress for the fuller figure this Halloween? There's a plethora of spooky, scary and downright glamorous outfits to choose!

Halloween Witch Costumes for Dogs
All witches need a familiar. But who's to say that the four legged one can't be the magical being, with a human familiar? Certainly not the canine in this costume!

Witch from The Wizard of Oz's Emerald City?

California Costumes by-passed the whole issue completely by creating a design inspired by The Wizard of Oz, without actually labeling it after any actual character.

The detail is absolutely unreal; and it certainly is brighter than pictured!  Far more emerald, in fact.

You will receive the bubble dress, with its jagged sleeves and lacy collar.  Over the top of that goes the over-dress, fastened with a faux emerald brooch.

Unusually for these outfits, the striped stockings are included in the package (almost worth it for those alone!).  Naturally the pointed hat, with its sheer green band, is also part of this outfit.

You will have to match your own shoes and provide your own broomstick though!

Disguise Costumes has created this spooky witch costume for Halloween.  It's had some great reviews from satisfied customers!

What you see is what you get, give or take the shoes and the fishnet stockings.  The trailing gown is 100% polyester and it clings to your body.

I love the hat!  That's my favorite part of the whole outfit (I'm strongly considering buying this myself especially for that hat).  You also get the eyeball accessories, one to hang around your neck and the other to carry in your hand.

You know, writing as a real Wiccan, this is the closest outfit so far to what we actually wear!  The collars might not be that ornate, and we rarely wear a hat like that, unless we're being ironic.

But I've certainly cringed as sleeves, just like those on Incantasia, have got too near to the altar candle.  Not on mine though.  I'm way too practical for pretty things like this.

This costume, by California Costumes, is one of the most popular Halloween witch costumes out there.  (I wonder if that's because real witches are snapping them up for their covens...)

It's hand wash only and it's made from polyester.  You get the dress and the hat, but you will have to match your own necklace, boots and broomstick.

Accessorize with a Witches' Halloween Broomstick

Let's face it, the costume definitely will not be complete without one of these!

There's always this alternative for witches at a Halloween party too.

A costume which won't look strange on the bus, but cleverly turns the tables on all of the usual witch fancy dress.

This time it's the witch dressing up as me or you. Well, more you.

A Muggle is a non-witch. It's a word invented by JK Rowling and made famous through the Harry Potter novels. If Muggles can go to Halloween parties wearing a witch costume, then why can't witches go to the same in a Muggle costume?

Halloween Ghost Costumes for Adults
There are some hauntingly good looks for your festive party this year. Grab yourself a spooky ghost outfit for Halloween; and practice those spine-chilling wails.

Halloween Skeleton Costumes for Adults
Clickity-clack, what's that? Something skeletal this way comes! Looking for something bone-shakingly spooky for Halloween? Check out the rattle-bones outfits here.

Halloween Vampire Costumes for Adults
Classy and spooky! We all know that blood-sucking vampires like to look their best. These horror-filled costumes are perfect for Halloween parties everywhere.
Updated: 10/10/2014, JoHarrington
Thank you! Would you like to post a comment now?
10

Yes! It's the Wednesday Addams approach!

:O you could dress up as yourself for Halloween!

Every woman should have one. Have you not got one? I have two!

Accessorise with a broomstick lmoa x

There were some lovely ones, weren't there? Which was your favorite? I think I'd have to go with the Wicked Witch of the West. :D

Cute ideas! These would be really elaborate! 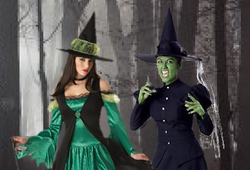 So many masks to choose from, but which is the absolute number one mask for Halloween in each horror genre? I've taken to the stores to find out.
95%  8   18 JoHarrington
Halloween Costumes for Adults