Are Omega juicers really that good? My honest review of some of the most popular Omega juicers, best prices and more...

Looking To Buy An Omega Juicer?

If you're looking for the best juicer for your needs, then you'll probably go through a number of Omega juicer reviews. Omega are one of the top brands when it comes to juicers, and their vertical masticating juicer is actually my pick as being the best masticating juicer. Their horizontal masticating juicers are also great juicers and are some of the rare efficient wheatgrass juicers. Omega also make centrifugal and ejection-style juicers.

Juicing is now a regular habit for many healthy conscious people. It is not a passing fad or a "hippy" or "new age" thing to do. Rather it has had proven health benefits and many people (me included) have realised how much better they feel when they juice regularly. Juicing helps you to intake more nutrition than you otherwise would which in turn leads to better health, more attentiveness and productivity, higher levels of energy and other benefits.

Omega Products was founded in 1985 and soon became a company well-known for its high quality juicers. In 2009, Omega merged with Legacy Companies. Today Omega's juicers are known to be some of the most efficient, easy to use and durable juicers. They are used commonly in both households and juice bars. Omega products usually have warranties of ten to fifteen years - the fact that their juicers last forever is the only reason why they can offer such extended warranties.

The Omega VRT 350HD is one of the most popular juicers that Omega produces. This is a vertical masticating juicer, which is quite a rare product, considering that most masticating juicers are horizontal. It has a small base and stylishly good looks, which means that it's easy to keep this juicer out on your countertop. In addition to being so good-looking, the Omega vert350 hd is an incredibly efficient juicer with high juice yields and a slow 80RPM juicing technology which ensures that the juice produced is nutritious, with intact enzymes and no oxidation.

The Omega VRT330HD is similar to the 350 model, except that the 330 has a white exterior while the 350 has a chrome and black exterior, and a finer strainer.

At the end of the day, Omega juicers are some of the best juicers out there - both in terms of the quality of the juice they produce, the ease of use and cleaning, and of course, value for money! 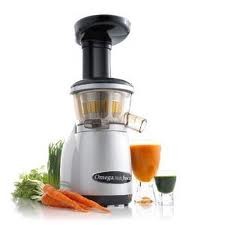 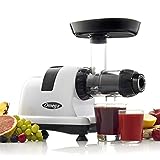