The late, great Frenchman Jean Rollin was one of the most unique horror directors ever. Here is a review of his sixth feature film. 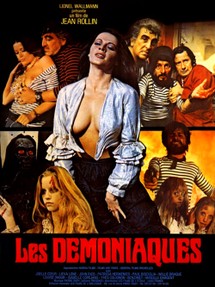 After four vampire movies and one Gothic cemetery tale, Jean Rollin once again changes direction with “Demoniacs” (“Les Démoniaques”). Without deserting the very special Rollin flavor, the director this time conjures up a wild romp about pirates and revenge from beyond the realm of the living.

“Demoniacs” is very influenced by the pop culture Rollin loved while growing up. The movie’s very comic bookish, but an even bigger influence is old, French movie serials; especially silent ones. This opus plays like a silent movie, albeit in color and with sound. The gestures are big. The movie opens -- once again -- with images of a beach, and inserted are the faces of four of the main characters, while a voice over tells us who they are: the big, crazy Captain, the bearded and evil Bosco, the henchman Paul, and Tina -- a beautiful but demented woman. They’re wreckers, they’re pirates searching shipwrecks for treasures.

The musical score sounds like it’s been ripped from an old adventure movie, but since the last of the title cards reads “Un film expressionniste de Jean Rollin,” we understand that this sure won’t be your average adventure romp.

While searching a beach in the middle of the night, the wreckers see two young, blond girls wearing white dresses staggering ashore; they seem to be survivors from some ship wreck. Instead of helping the poor girls, the wreckers beat them up, rape them and leave them for dead on the beach. Then the nasty foursome heads for a tavern.

There’s a lot of people in the tavern, sailors and whores, and the wreckers get drunk -- especially the Captain, who suddenly sees the two blondes appearing like ghosts. The pale girls bleed from their eyes and noses, and the Captain goes nuts -- but nobody else can see what he sees.

Suddenly, a frightened man enters the tavern and claims he’s seen two girls on the beach. They’re apparently on their way to the haunted ruins where the Devil is said to live. The wreckers realize that they didn’t kill the girls after all, and rush to the beach to finish the job. They find the girls, who try to hide in a ship wreck -- but the wreckers set the ship on fire.

The two blonds escape and flee to the spooky haunted ruins. Dreamy flute music is heard and they spot a female clown sitting on a pedestal. The clown leads them to a bearded man, who’s guarding a tomb where his master lives. He’ll take the visitors to his master. 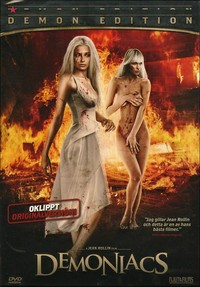 Meanwhile, the wreckers are back in the tavern. In one of the rooms, Tina strips down and tries to seduce the Captain, but it doesn’t work -- he just can’t stop thinking about the two blond girls. He grabs a stuffed seagull, caresses it, kisses it -- and then rips its head off!

The wreckers understand that the girls are in the ruins, so they go there to kill them -- but the girls (or are they ghosts?) now have supernatural powers. They make religious statues fall over and drop down from roofs and pedestals. A statue of Jesus falls over Tina (crushed by Jesus!), but she survives.

Back on the beach, the girls find the frightened Paul, who’s drinking booze from a demijohn (!). The girls grab the demijohn and kills Paul by smashing it over his head. But unfortunately the rest of the wreckers arrive to the scene. They tie the girls to parts of a shipwreck sticking up from the sand and intend to violate them one last time.

In the typically weird ending, the wreckers kill each other, the Captain is the last man standing, but he drowns.

“Demoniacs” is quite a marvelous movie. It’s wild and crazy, funny and entertaining, but still dreamy, nightmarish and haunting in that typical Rollin way. I’m not sure when the story is supposed to take place, but it makes me think of the great French comics artist Jacques Tardi’s comics set in the early 20th century.

The eerie beach with it’s wrecks is quite a view, and the final images of the girls tied to the wrecks while the water is flooding in aren’t something you easily forget. Joëlle Coeur, who plays Tina, is a very charismatic woman; gorgeous, sexy, fun -- and she likes to get naked quite a lot in this movie. Miss Coeur appeared in a string of European movies during the 1970s, some of them adult ones. The girls who played the demoniacs were never to be seen again -- at least not in any movies.


Would you too like to write for Wizzley? ClickHERE for more information! 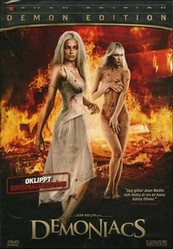