The late, great Frenchman Jean Rollin was one of the most unique horror directors ever. Here is a review of his second feature film. 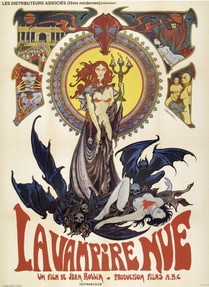 Unlike the debut film; “The Rape of the Vampire,” Jean Rollin’s second movie was shot in color. Lots of colors. This candy-colored movie looks like a psychedelic French comic book from the year this movie was made; 1970.

This time, Rollin also had a real screenplay. The story of “The Nude Vampire” (“La Vampire Nue”) is heavily influenced by the stuff Rollin loved when he grew up: comics, of course, but it’s even more inspired by old, French pulp fiction and old movie serials. We get mysterious cults, hooded killers, vampires, all thrown into a wild, weird and quite wonderful mix. And as usual, there’s not very much dialogue.

The movie opens in a laboratory, in which men wearing animal heads (deer, chicken etc.) drain blood from a naked woman sporting a red hood over her head. Then we cut to another woman, barefoot and wearing a colorful, see-through dress, running through the streets of Paris. We find out she’s being chased by the men with the animal heads. The woman runs into a young man -- Pierre -- who accompanies her until they’re surrounded by the followers. Suddenly one of the men pulls a gun and shoots the woman! Pierre manages to escape, but follows the animal head wearing men and sees them entering a gate. Something is going on in there … Pierre tries to enter, but a guard asks for his invitation, which he hasn’t.

Later, Pierre makes another attempt to get inside the mysterious building. He knocks down a man on his way there, steals his invitation -- and manages to get in along with some other men, all wearing tuxedos. He’s led to a room, where a man shows a photo of a woman. The woman enters the room, takes out a revolver -- and shoots herself! What the hell is going on?

The gathered men and women put on colorful hoods while the dead woman is placed on a stage. The girl who was shot in the streets enters the stage and drinks blood from the dead woman’s wound. A new photo is shown -- this time a portrait of Pierre. A man hands a revolver to our hero, but instead of shooting himself, he kills a couple of the people in the room and runs away. He runs out of bullets, but is saved by a girl wearing some kind of Barbarella outfit, who uses a dagger to kill one of the members of the cult. A man wearing a silver cloak also helps out and Pierre manages to escape. 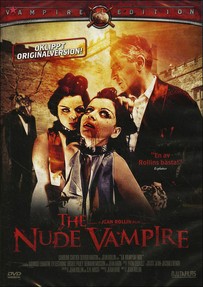 Pierre calls Robert, a buddy, for help, Robert is an artist who’s painting a naked black girl with long, golden fingernails. It’s in the middle of the night and the two friends go to Pierre’s dad’s office; apparently he’s something to do with this strange cult. There’s lots of people working in the office, but suddenly a bell rings, they put on red hoods, and that girl who was shot in the street (“Maybe she’s a robot?” Robert suggests) enters. Pierre and Robert are caught.

We find out that the mysterious woman is suffering from a rare disease; well, she’s a vampire, or something like that. The suicide cult worships her like a goddess. Pierre’s dad and a group of scientists believe the vampire's blood is the key to eternal life. Then they all go to a big chateau in the countryside and things go, well, stranger …

As you can tell, this isn’t a vampire movie the “Twilight” crowd will enjoy. Or the average horror movie fan. “The Nude Vampire” goes beyond your standard horror fodder. It also manages to go beyond most other B-movies. What we have here is a unique combination of sexploitation and art-house. Is it trash? No, definitely not. Is it art? I don’t know. Okay, sure, all movies are probably “art” in some way.

“The Rape of the Vampire” had almost no story at all. “The Nude Vampire” has an unusually detailed plot for being a Jean Rollin movie. Vampires, erotica, espionage; there’s a lot going on here. It’s also funnier -- on purpose -- the the other Rollin movies. Jean Rollin still hasn’t found his style in “The Nude Vampire,” but he’s almost there, and this is a very good looking, atmospheric movie -- and great fun! 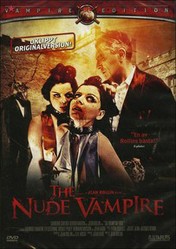